NASCAR Next Gen Test at Bowman Gray Stadium Was Big on Show, So-so on Go 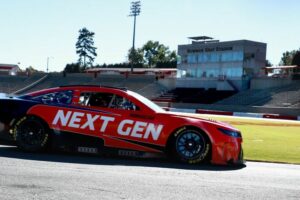 Tuesday’s hour-long test of NASCAR’s 2022 Next Gen car at historic Bowman Gray Stadium was more a media-driven PR event than a substantive technical and engineering exercise. After all, what’s to be learned on a quarter-mile bullring inside a football stadium that teams don’t already know.

Well …. maybe the point all along was the fact that the much-ballyhooed car will debut in an exhibition race on February 6 on a quarter-mile bullring inside the Los Angeles Memorial Coliseum. NASCAR tested at BGS in Winston-Salem, North Carolina because it’s a fairly-close replica of the track being built for next year’s The Clash exhibition race two weeks before the Daytona 500.

To the utter surprise of nobody, not a major complaint was heard.

“I think this car is a great match for this track or any track, whereas the car we have now doesn’t work everywhere and is difficult in places like this,” Earnhardt said. (Currently, NASCAR’s shortest track at Bristol is about a half-mile). “I’m sold now. This car does everything better. I was skeptical, but I think it’s going to work really well. The car gets around the corner. I thought the track would be too small for our cars and they just wouldn’t handle and drive well, but this is a totally different beast. This car does all the things that I was worried about. It does them all and it does them well.”

Earnhardt, who won two Xfinity Series championships, 26 Cup Series races, and is in the NASCAR Hall of Fame, was most impressed about the car’s braking performance. That’s one of the technical improvements often cited by officials as something that will improve competition next year.

“The brake performance is gonna take some time for me or any of these guys (in the Cup Series) to get used to,” he said. “That was probably the one thing I found myself improving the most as I ran. The lap times got better going into the corners because these brakes work so much better. I’m over-slowing the car using the brake pedal the way I’ve always in my life, so that was one thing. But it’s got a bigger turn, more grip, does everything much better.”

Bowyer was impressed by the car’s responsiveness and the ease as he went through the new sequential shifter. “I’m very impressed with the grip level, the braking power, the tire that Goodyear chose,” he said. “I’m glad I got to come out here. I’ve been here a lot in the grandstands, up there in that beer garden more than any seat, but I wanted to come out here and turn some laps.”

Tuesday wasn’t just another car test for Earnhardt. Despite living relatively close by, he had never been to the track inside the Winston-Salem State University’s football stadium. His late grandfather, Ralph Earnhardt, won four races at BGS; his father, Dale Earnhardt, never raced there.

“I came in today with a lot of excitement in my heart about my family’s connection to the race track,” he said. “I’m now able to check a box to say I’ve been here (for the first time), much less to be able to get some laps here. That was a pretty special thing for me.

“It’s a very intimidating place. The guardrail … you’re racing around there and that guardrail is just chewed up and it’s just daring you to hit it. It’s really intimidating. That, in itself, was a great experience for me, no matter what car I was driving today. It was awesome to come here and experience this place behind the wheel.”

NASCAR had already tested the Next Gen car a handful of times on longer tracks, and has other tests scheduled in the next month or so. Its official debut will be in the support races leading into next year’s Daytona 500 on February 20.