NASCAR Teams to Begin Receiving Next Gen Chassis This Week 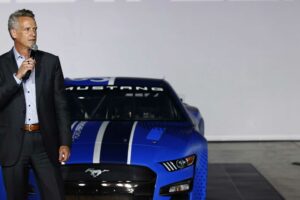 NASCAR anticipates delivery of Next Gen chassis to begin by the end of the week.

This follows a review from an independent safety panel that provided a positive assessment of the intentional crash of a prototype that took place on June 30 at Talladega Superspeedway. The prototype was driven by a robot and fitted with a crash dummy — providing an opportunity to study how a driver would be affected by the impact.

The sanctioning body has informed drivers that it was pleased with the panel’s assessment and will move forward with the delivery and construction phase of the new car.

Next Gen has undergone a tremendous amount of scrutiny in the garage from drivers — who felt NASCAR hadn’t communicated the safety process and results with them. The sanctioning body informed drivers on July 4 that crash testing of a prototype “indicates good and comparable performance” when compared to other right front crashes with non-Next Gen cars.

For the first time in Cup Series history, single source manufacturers will be responsible for building the chassis, providing parts and supplying a carbon composite body. The chassis has been designed by Technique. This is for all intents and purposes a spec racing platform.

Chevrolet, Ford and Toyota have designed distinctively different bodies that resemble the showroom counterpart Camaro, Mustang and Camry. The platform will continue to use the current generation internal combustion, pushrod V8 produced by each manufacturer as well.

The car is best described as a hybrid between an Australian Supercar and a GT3.

Overall, the purpose of the car is to lower the costs of competition, increase competitive parity and permit greater manufacture relevancy.

The car is targeted to debut during Daytona Speedweeks.