Why the Regular Season NASCAR Championship Matters This Year 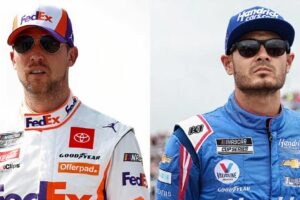 When the NASCAR Cup Series playoffs begin next month with the Southern 500 at Darlington Raceway, Denny Hamlin will have already been in playoff mode for seven months.

There will be no flipping the switch for the three-time Daytona 500 winner because it’s already on.

Hamlin has led the standings since the second race of the season, remarkable since he has yet to win a race, but was finally caught on Sunday by five-race winner Kyle Larson. With three events remaining, Hamlin and Larson are suddenly tied with 917 points apiece.

“I’m glad there’s a fun, little regular season points battle,” Larson said after winning on Sunday at Watkins Glen. “I feel like in years past, it’s been a blowout come the last race.. To be tied with three races left is pretty cool.”

It’s cool, but it’s of more consequence to Hamlin than Larson, who will more likely than not enter the final 10 races as the top seeded contender due to a near insurmountable playoff point advantage.

However, the next three races could mean literally everything to Hamlin.

For one, while this isn’t particularly likely, Hamlin would fail to qualify for the elimination showdown if he finishes second without a win in the regular season point standings with 16 different winners. There have been 13 different winners thus far and there are three races remaining.

More than likely, Hamlin will make the playoffs, but the regular season championship is worth 15 additional playoff points at the start of each round. Finishing second in the regular season standings pays 10, third place receives eight points, and the points awarded decline to one point for 10th (fourth = seven points, fifth = six points, etc.).

Ask 2020 regular season champion Kevin Harvick how valuable even a single point is in the penultimate round of the playoffs.

Hamlin leads the Cup Series with an 8.5 average finish this season, making his winless column all the more puzzling, but he’s a bonafide contender nevertheless.

Each victory is worth five playoff points, meaning Larson and Hamlin are racing for the equivalent of an additional win over the next three weeks at the Indianapolis Motor Speedway Road Course, two-mile Michigan International Speedway and the Daytona superspeedway.

“It’s going to be a battle all the way to the end,” Hamlin said after a fifth-place finish on Sunday. “It’s a mix of racetracks; we’ve got a little taste of everything. I would suspect it’s going to take until the last lap at Daytona to figure this thing out.”

While Hamlin certainly would have liked to have won by now, his No. 11 Joe Gibbs Racing team has been battled tested all summer long, doing what it will ultimately take to advance in the playoffs — avoiding DNFs and finishing around the top-five every week.

“I like this because it’s making me keep my form through the whole year,” Hamlin said. “It’s really pushing me to treat every race like it’s a playoff race. Had this been a 100-point lead like it was earlier in the season, maybe you’re just relaxing a little bit and then all of a sudden have to turn it on right when the playoffs come on. This is pushing us to go all out every race.”

Larson expects the championship to run through Hamlin in some form, so he appreciates this battle before the battle that counts, too.

He even offered a similar analogy.

“Say he still had an 80-point lead or something,” Larson said. “You could get lazy and not care as much and make mistakes, whether it be make a dumb move on restart or speed on pit road, which we’ve both done a few weeks ago. But now it’s like every point matters to get those five extra bonus points.

“Yeah, I think keeping your mind strong and sharp through the regular season is important to where you don’t have to just flip a switch now when it comes playoff time and who knows if you’re mentally there.

“I think for him and I both, we’ve been mentally there for a while now. So, I think come playoff time, we’ll just keep on doing what we’ve been doing, and hopefully we’ll find ourselves in the Final Four.”

The five extra bonus points for Hamlin, if a win doesn’t come before that, would place the No. 11 team on par with those with two or three wins. He would enter the playoffs on par with three-race winner Martin Truex Jr. who currently has 20 playoff points but is seventh in the standings.

That could be enough to enter as the third seed.

Finishing second in the standings would mean five less playoff points, around 15, meaning a fourth or fifth place seeding.

Again, look no further than what happened to Harvick last season for why every playoff point mattered throughout the year, which is why this a battle worth following over the final three weeks before the reset.