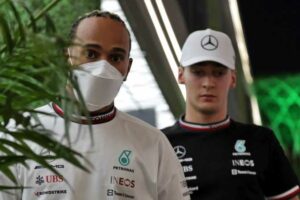 The Grand Prix Drivers’ Association says it was “natural human concerns” that led to the F1 drivers threatening to walk away from the Saudi Arabian GP on Friday night.

Round two of the 2022 championship, the Saudi Arabian Grand Prix, was thrown into doubt on Friday when rebels attacked an oil facility less than 10 miles away from the Jeddah Corniche Circuit.

The missile attack during place during Friday’s first practice after which the drivers and team bosses held talks with F1 chief Stefano Domenicali and the FIA.

While they agreed to take part in FP2, the start of which was delayed by 15 minutes, that was followed by more talks during which the drivers threatened to boycott the rest of the race weekend.

After a four-hour long meeting, they agreed to race but the BBC Sport says that only happened after they were told of the ‘possible consequences of not racing, such as how easily teams and drivers would be able to leave the country if the race did not happen’.

Drivers were warned of 'consequences of not racing'

'…such as how easily teams and drivers would be able to leave the country if the race did not happen.'https://t.co/iVvIDCKLhN #F1 pic.twitter.com/Wfs8yq0Wvp

The GPDA released a statement on Saturday defending the drivers for wanting to leave Saudi Arabia, calling it “natural human concern”.

“Yesterday was a difficult day for Formula 1 and a stressful day for us drivers,” the GPDA said.

“Perhaps it is hard to comprehend if you have never driven an F1 car on this fast and challenging Jeddah track but, on seeing the smoke from the incident, it was difficult to remain a fully focused race driver and erase natural human concerns.

“Consequently we went into long discussions between ourselves, with our team principals, and with the most of the people who run this sport.

“A large variety of opinions were shared and debated and, having listened not only to the Formula 1 powers but also to the Saudi government ministers who explained how security measures were being elevated to the maximum, the outcome was a resolution that we would practice and qualify today, and race tomorrow.

“We therefore hope that this edition of the Saudi Arabian Grand Prix will be remembered for the good race and not for the incident that happened yesterday.”

Saudi Arabian authorities have assured the Formula 1 paddock that it is safe with Red Bull team boss Christian Horner saying the “sport has to stand together collectively.

“Any act of terrorism cannot be condoned, and the sport shouldn’t be bullied into a position that a situation like that just isn’t acceptable.”