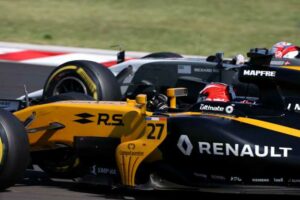 Never mind burying the hatchet, Nico Hulkenberg and Kevin Magnussen have buried the balls as the two former rivals find themselves back on the F1 grid.

The two clashed at the 2017 Hungarian Grand Prix, Hulkenberg furious with Magnussen after the Haas driver forced him off the road.

The German, racing for Renault at the time, confronted the Dane while he was in the middle of an interview.

And so Formula 1 was gifted one of its better one-liners.

Almost five years later the two, now both fathers of young daughters, have buried the hatchet – and the balls.

Both are back on the grid this season, Hulkenberg substituting for Sebastian Vettel at Aston Martin while Magnussen has a full-time ride with Haas.

That opened the door for their first friendly conversation in years.

“I actually greeted him with, ‘Suck my balls, honey’,” Hulkenberg told Motorsport.com. “That’s my exact words to him.

“And we actually hadn’t… it’s not like I dislike Kevin but after that happened in Budapest we haven’t really spoken a word since. Even before that, we’ve never really spoken to each other.

“I thought it was about time. Because I don’t dislike him, I just thought that incident on the track was a little bit harsh.

“As racing drivers you do tend to disagree every now and then. But I thought it was quite funny to greet him with the ‘Suck my balls, honey.’ He quite liked it!”

“I mean, it’s not something that’s been bothering me too much,” he said. “But yeah, it’s always nice.

“I mean, we never spoke about that thing. The funny thing is, with Nico it’s not the only thing that I’ve tried which was kind of like this.

“You see the media build up some tension between us, like me and Romain, or me and Nico. And actually, there’s a lot of respect there in reality.

“Some things are perceived in one way from the outside, and it’s very different from the inside.”