Nico Rosberg gets back behind the wheel in Extreme E car 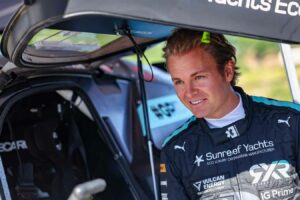 Nico Rosberg has been behind the wheel of his Rosberg X Racing Extreme E car, in what the team described as a “fun exercise” for its founder.

The 2016 Formula 1 World Champion promptly retired after winning his sole title with Mercedes, and has been vocal in his contentness about his competitive racing days being over.

But he took the opportunity to have a go at driving in a rally car for the first time at the Nurburgring Offroad Park, a one-kilometre loop within the vicinity of the infamous ‘Green Hell’, while visiting the team’s nearby headquarters, and addressed his team members.

Rosberg drove the ODYSSEY21 – the 550bhp all-electric off-roader used in Extreme E, and he said he enjoyed the chance to test himself at racing speed again – albeit in different machinery.

Nico Rosberg has been back in a racing car 👀

“This was simply a phenomenal experience,” Rosberg said. “I cannot believe the power of this car. Off-road driving is so much fun. Even though I have not been behind the wheel for a long time, I immediately was in my element.

“The muscle memory came back instantly, and I simply enjoyed myself. Rally driving is an entirely different beast from circuit racing, though, and I have a newfound respect for Mikaela [Åhlin-Kottulinsky] and Johan [Kristoffersson, race drivers].”

Rosberg is now an occasional pundit on Formula 1, and recently voiced his opinions on the current state of the sport on Sky F1’s Any Driven Monday, in which he claimed Ferrari driver Carlos Sainz is not currently World Champion material, and believes Max Verstappen “drove to perfection” when taking victory in the Canadian Grand Prix.

As for the Extreme E season, the series will be heading to Sardinia for a double-header at the Island X-Prix, with rounds two and three taking place on 6-7 and 9-10 July respectively.

RXR took victory at the first round in Saudi Arabia back in April, with former Formula 1 rivals Lewis Hamilton and Jenson Button also entering teams of their own in the series – and McLaren ventured out and joined Extreme E in time for the new season.