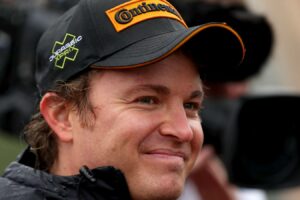 Nico Rosberg says his relationship with Lewis Hamilton is “good now” – after revealing an impromptu meeting with his former team-mate and arch-rival.

The former Mercedes colleagues and one-time close friends fell out when competing for World Championships, with team principal Toto Wolff having to act more as a referee between them when things were at their most heated.

After Rosberg won the 2016 Drivers’ title he retired within days and since then, public interactions between he and Hamilton have been few and far between – and seemingly frosty.

But there were signs of a thaw when the subject with discussed with the German on Sky F1 at the end of free practice day for the Monaco Grand Prix.

The conversation with presenter Natalie Pinkham followed a segment in which Hamilton spoke about how his association with Monaco, where he now lives, had begun.

“It wasn’t until I actually went to Monaco when I was 13, I was invited at the time by Nico, we were karting together in Italy,” said Hamilton.

“He was racing for another team at the time but we ended up being friends. They invited me to Monaco, which is where he grew up, so I remember being there at the time and thinking ‘wow, this is the most beautiful place I’ve ever seen’.”

Asked about that influence, Rosberg replied: “It’s nice to hear that from him, that my family and I were able to show him some lovely things which he aspired to one day be able to do himself.

“And now in fact we live in the same building in Monaco. We shared the lift this morning. I was with my two daughters going to the trampoline at the pool and he was going to the racetrack.”

In a further conversation about Rosberg’s successor at Mercedes, Valtteri Bottas, giving Hamilton a present of a photograph of the Finn bathing with his bare backside on show, there were further signs of bridges being rebuilt.

“Lewis has gifted my daughter something in recent years, so he’s been very kind,” added Rosberg, who said the fact the duo had been striving for the same goal meant the end of their previous close relationship.

“The dream of being a World Champion essentially is just that much greater than sometimes a friendship in that sense,” said the 36-year-old, who has also become a rival team boss of Hamilton in the Extreme E series.