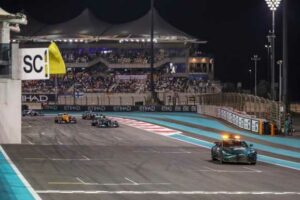 From the stewards making a “tough” call on the opening lap to Michael Masi “not” following the Safety Car rules, Nico Rosberg has had his say on the Abu Dhabi GP.

Max Verstappen and Lewis Hamilton went into Sunday’s season finale at the Yas Marina circuit with everything to play for as whoever finished ahead, he would win the Drivers’ Championship title.

Although Verstappen started on pole and on the soft tyres, Hamilton, running the medium Pirellis, made the better start and took the lead.

Verstappen tried to fight back, diving up the inside of Hamilton at the chicane on the opening lap.

While he kept his Red Bull on the track, making the corner, Hamilton did not and cut it, rejoining the track with a clear advantage over Verstappen.

The stewards declared that it was fine, only telling Hamilton to hand back the advantage but not the position.

Red Bull felt that was the wrong decision as Hamilton also didn’t give back all the advantage, otherwise Verstappen would have – at least momentarily – been on his rear wing.

“Oh my goodness, so difficult,” Rosberg told Sky F1. “I think it’s OK what they done.

“And then I would say that Lewis didn’t give back everything that he gained, so it’s tough, but I think it’s OK like this.”

But while that decision went against Verstappen, the late race Safety Car call was his Hail Mary pass for the grand prix.

Respect all round on the podium after an epic title race that will be remembered forever 🏆#AbuDhabiGP 🇦🇪 #F1 @Max33Verstappen @LewisHamilton pic.twitter.com/EDgKox9AoJ

Hamilton was leading by more than 10 seconds when Nicholas Latifi crashed at Turn 14.

Race Control brought out the Safety Car as the marshals cleared the stricken Williams with FIA race director Michael Masi initially saying no cars would be allowed to unlap themselves.

He then declared that those between Hamilton and Verstappen could, but only those five. There were eight lapped cars in total.

Verstappen, running fresher soft tyres, easily attacked Hamilton for the lead, taking it, the race win, and the Drivers’ title.

Rosberg says Masi got that one wrong but feels for the Australian as not for the first time this season he faced a backlash no matter what call he made.

“It’s the fact they let half of them un-lap, and then also it says by regulation you need to wait another lap to then do the start,” said the 2016 World Champion.

“So there’s a lot of things where he [Masi] did not follow the rules.

“You’ve got to feel some compassion for him. He’s got the whole world watching and he has to decide in the next 15 seconds what he’s doing.

“It’s the last lap of the last race of the World Championship, that is the ultimate, most high-pressure situation in the world, and he took his decision which gave us beautiful awesome racing and an incredible finale.

“We need to be careful. Michael’s job this year has been so unbelievably difficult to manage this intense battle.

“Michael needs support this winter, there needs to be progress over frameworks and guidelines and we should be in a better position for next year.”