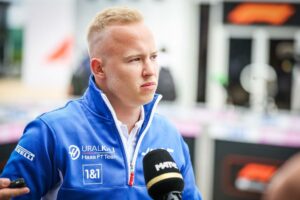 Nikita Mazepin says his mental health has stood up well to the criticism he has received during the first half of his debut Formula 1 campaign.

The Russia-born driver has been the subject of flak from F1 fans ever since the announcement that he would drive for Haas this season was followed just days later by a public rebuke from the team when he posted an offensive video on social media.

Mazepin’s driving has also been slated for the number of spins in which he has been involved over the first 11 races, while other competitors, including his own team-mate Mick Schumacher, have expressed frustration with him.

However, despite continually racing at the back of the field, there have been signs that the 22-year-old may be starting to settle into the job having kept a cleaner sheet over the last few grands prix, whereas Schumacher has racked up hefty repair bills with a series of crashes.

It has certainly been a baptism of fire for Mazepin but it is one he thinks he is coping with despite the brickbats that have come his way.

“I went through some difficult times, some learning times,” said Mazepin, quoted by GP Fans Global, when asked about his mindset and whether he was gaining confidence.

“I think mental health is an important thing. There are people out there who are struggling much more than me, so I can’t really complain.

“At the end of the day, when I turn up to a race track in Bahrain, everything is new to me.

“I think the confidence you’re referring to is more to do with me not being confident in driving that very fast new car that I only had one-and-a-half days of testing in. Obviously, it’s one thing testing. The other thing is 19 very fast drivers around at a very high speed.

“Life’s a big learning curve. I’m just getting better in everything I do and try to improve as the day goes on.”

Haas team principal Guenther Steiner has said there are misconceptions about Mazepin, but that he had not helped himself on his arrival into F1.

“Not being in the headlines he was in, it’s a very good thing,” said Steiner.

“I think in the beginning, it seemed a never-ending story. Once it started to go away, I wouldn’t say things never go away completely but they wind down.

“Part of it also is behaviour. People saw he’s not the person people wanted to portray that he is. When I got to know him, I said ‘people think he is what he is not’.”