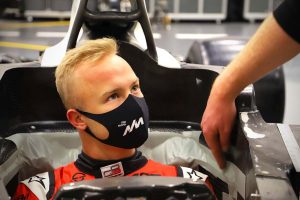 Nikita Mazepin has admitted he “made a huge mistake” by posting the social media video for which he was condemned for by the Haas team.

Two days after turning 22, Mazepin was speaking on the day Haas launched their 2021 car which will be decked out in the colours of the Russian flag – the result of a sponsorship deal with the rookie driver’s businessman father, Dmitry.

In early December, days after he had been hired by Haas alongside Mick Schumacher for an all-rookie driver line-up, Mazepin jnr posted and quickly deleted a video on social media which showed him inappropriately touching a woman.

The team rebuked Mazepin, describing the video as “abhorrent”, and the driver posted an apology – although that too was later deleted.

Inevitably, in a media call on the day of the launch, Mazepin was quizzed about the incident – and insisted he has not only taken responsibility for his actions but will continue to do so, hoping his talking will be done positively on the track from now on.

Check out the brand new Puma range on the official Formula 1 store!

“How I reflect on my actions is pretty clear, I’m not proud of it,” said Mazepin, quoted by Motorsport Week.

“I didn’t behave as I’m meant to behave. Being in Formula 1 and the transition phase of realising what I have achieved has been very short, and I didn’t adapt to it as I should have had. I made a huge mistake, I’ve taken responsibility for it and I’m ready to keep doing so.

“I’m pretty sure I will be delivering on track. I’m confident with the effort I’m putting in and the direction I’m taking the results will be there, and I will try and have the racing do the talking.”

Mazepin expanded on his status as a role model, with now being an F1 driver, especially for youngsters watching and following the sport.

“Graduating to Formula 1 and being a Formula 1 driver means all of a sudden, you become an example to a lot of young kids who are aiming to get into the same championship,” he added.

“With that, you have to bring a certain way of behaviour towards yourself. I haven’t done it instantly.

“Both on and off the circuit, we as human beings have to show a certain behaviour towards each other to live in a calm and humane world.”