No Ferrari title fight in 2022 would be 'a failure' 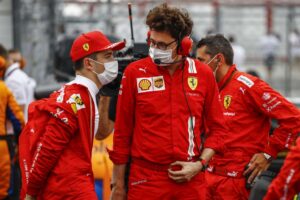 Mattia Binotto has said it’s essential for Ferrari to put up a challenge for the World Championship in 2022, and not doing so would be a “failure”.

The Scuderia have shown solid signs of progress after a torrid 2020 season which led them to their worst Constructors’ Championship finish since 1980.

This season though, they’re level on points in the fight with McLaren to take third in the teams’ standings at the halfway point of the season, and have two pole positions to their name through Charles Leclerc in Monaco and Azerbaijan.

Ferrari team principal Binotto spoke in no uncertain terms about the Scuderia’s need to be fighting at the front in 2022, claiming that the team will have “done everything wrong” if they’re still stuck in the midfield, or worse.

“It is not a mystery, our goal is to win the World title as soon as possible,” Binotto said, via Scuderia Fans. “We are aiming strongly for 2022, as a result of the new aerodynamic regulations.

“Fighting for the title next year is a must. We are working hard for this: failing to do so would mean having done everything wrong. A failure.”

The team have been enjoying on-track success with their driver pairing of Leclerc and Carlos Sainz, who make up Ferrari’s youngest ever line-up behind the wheel.

Leclerc said that his strong working relationship with Sainz has helped the team push forward from their difficult period last year, and they will need to keep up that positive environment if Ferrari are to challenge for their first Constructors’ title since 2008.

On that front, though, their team principal is optimistic that they are the team who have been able to make the biggest improvement in performance when compared to their 2020 car, and they will need to be up for the fight to keep P3 in this season’s standings come Abu Dhabi.

“Overall, if you look at the first half of the season we are pretty happy, we are progressing, the way we progressed last year,” said Binotto, per GP Fans.

“We are the team that relative to last year has scored more points, that has progressed most overall.

“It’s showing that we are going in the right direction and working well together.

“The summer break is important to get ready for a very intense second half of the season. We need to make sure we are prepared and ready for it.”