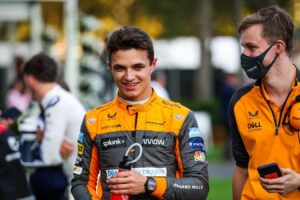 Lando Norris admitted qualifying fourth for the Australian Grand Prix felt like a pole position after McLaren’s troubled start to the season.

After vying for third place in the Constructors’ Championship for the past two seasons, McLaren have effectively been also-rans at this year’s opening two races in Bahrain and Saudi Arabia.

Their problems began with brake issues that limited the mileage in official testing and Norris says the team still have a long way to go to get to where they want to be competitively.

But qualifying in Melbourne was much more positive as the Briton is due to line up on the second row and his team-mate Daniel Ricciardo, in his home race, in seventh.

“It’s a very good result for us – feels like a pole position in some ways, from where we’ve been the last few weekends,” Norris told reporters.

“We struggled to get out of Q1 in Bahrain and almost made it to Q3 in Saudi – it’s nice to be this far up.

“I guess we are still a long way off the pace, but position-wise to be a lot further up is nice to see – a good reward for myself and the team.”

However, Norris, who was 0.835sec behind pole-sitter Charles Leclerc in Q3, thinks the result was more a question of the Albert Park circuit suiting McLaren better than the previous two.

“I think we’ve made some small steps forward as a team, and we’ve been working well as a team to still try and find as much as possible,” added the 22-year-old.

“But realistically it’s just the car is much quicker on this track than the others and that’s the main part.”

Norris will start just ahead of Mercedes duo Lewis Hamilton and George Russell – and is realistic that his main target will be to keep them behind along with Carlos Sainz, who is out of position performance-wise in P9 in the Ferrari, and the two Alpine cars in P8 and P10.

“I think the hard-work part of it has moved us ahead of Mercedes this weekend,” added Norris.

“Normally the race pace from the Mercs is very strong and tends to be a little bit stronger than ours.

“I [also] have one red car behind me which I’m not expecting to be fighting too much. And the Alpines have probably looked a bit quicker than us this weekend, especially Fernando but he ended up in the wall [in Q3].

“But we had better pace than we expected today and hopefully that will continue into tomorrow.”