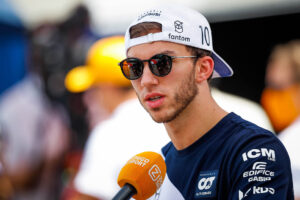 Pierre Gasly is confident he would be performing “at least” on the same level as Sergio Perez if he was back in the Red Bull seat.

Gasly was the driver chosen to replace Daniel Ricciardo ahead of the 2019 season, but his Red Bull stint lasted just 12 races as he struggled to get anywhere near the same level as Max Verstappen towards the sharp end of the Formula 1 field.

Both the poor results of Gasly and his replacement Alex Albon has now led to Red Bull looking outside of their own set-up and employing the vastly experienced Sergio Perez.

That has already brought success to the team in 2021, with Perez winning the Azerbaijan Grand Prix and following up with another podium in France – achievements Gasly was not able to tick off his list during his short time with Red Bull.

But Gasly, who thinks he is a different driver now following his demotion back to AlphaTauri, reckons he could be providing Red Bull with the same results as Perez if he was back in the car.

thumbs up if you got that @PierreGASLY vibe today 👍 pic.twitter.com/SndNB71bY0

“I think I could perform at least as well as him,” Gasly told reporters in Austria when comparing himself to Perez.

“I’m working very hard to become a complete driver. And I show that on the track as well. I’m fighting against Ferrari and also against McLaren, and I’m doing it constantly.

“I perform in qualifying and also for races and I think I show very good potential.

“I don’t think any other driver has reached 37 points with AlphaTauri after seven races.

“In the past, such results were always rewarded directly with a jump to Red Bull – or at least pretty quickly.”

Gasly has made no secret of the fact that he wants a second chance in the Red Bull seat, but he does not think that feeling is currently reciprocated by the team.

He said: “I would like to do that. But will it happen? That depends on whether Red Bull wants it too. At the moment I don’t think they want it.

“There have been no talks on the matter yet. But we will have to have them at some point.”