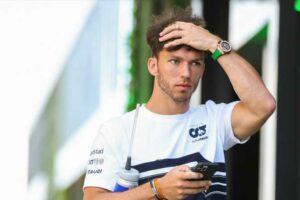 Pierre Gasly was forced to see the doctor after suffering from severe intestine pain during the Saudi Arabian Grand Prix.

On the face of it, Gasly’s result at the Jeddah Corniche Circuit already looked solid, the Frenchman finishing P8 on an evening where team-mate Yuki Tsunoda had dropped out pre-race thanks to a suspected drivetrain issue.

Gasly’s P8 finish, securing him and AlphaTauri four points, even came after some bad timing from the Safety Car had dropped him down to P14.

Put to him that P8 was a great result, Gasly told Sky F1: “Yeah, I mean especially considering we got pretty unlucky with the Safety Car.

“I think we boxed 30 seconds before it came out so we basically went from whatever position we were to drop to P14.

“After that we managed to make our way back to P8, so really happy with that.”

points on the board for 2022 😎 we like that! pic.twitter.com/3RYJDEoU6D

Gasly went on to reveal though just how much he suffered for that reward, explaining that he had to endure severe intestine pain for the last 15 laps.

And in the final 10, every left-hand corner led to stabbing pains.

“The last 15 laps I’ve never had that much pain, I don’t know what happened in my intestine,” he said.

“The last 10 laps was like getting stabbed every left corner, the most painful laps I’ve had so I don’t know what’s happened.

“Anyway I’m just happy the race is over and happy we got these points.”

Even when he was in the media pen doing the interview, he was far from fully recovered.

Asked how he felt now, Gasly replied: “Quite bad!”

So, told that the interview would be wrapped so that he could see the doctor, Gasly explained that he had already done so, adding that in the latter stages of the Saudi Arabian Grand Prix, he could not focus on much more than just staying in the race.

Told he needs to see the doctor, Gasly responded: “I’ve seen him already, we’ll see after, I don’t know what it is but it was not a nice feeling, it was more like surviving rather than anything else.