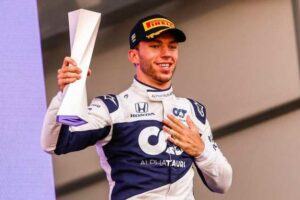 Pierre Gasly said his AlphaTauri car felt “incredible” in the Azerbaijan Grand Prix as the Frenchman earned a superb podium finish in Baku.

Gasly followed up his form in qualifying on Saturday by running high up the order throughout Sunday’s race, and benefited from Max Verstappen’s retirement through a tyre failure and Lewis Hamilton running off the circuit at Turn 1 on the race restart, to help him on his way to his third Formula 1 podium.

Sergio Perez battled through a hydraulic issue and won the race in Baku, while Aston Martin’s Sebastian Vettel joined the pair on the podium after a scintillating Azerbaijan Grand Prix.

“Incredible, honestly, I really don’t know what to say,” Gasly told Paul di Resta as he gathered his thoughts after Sunday’s race. “It was such an insane race and a super-intense last two laps.

“The car’s been incredible all weekend and we showed in every section we were there. [After] qualifying, I didn’t know if we could keep that position or fight for even a podium, but in the end we did it.

“I’ve already finished once first, once second and I’ve missed that third place, so it feels incredible today to get that podium.”

Gasly was locked in a heated battle for the final podium place with Ferrari’s Charles Leclerc and McLaren’s Lando Norris in the two-lap sprint to the line, but said he was able to earn P3 despite having a problem with his power unit.

“We had to get the elbows out,” Gasly smiled when asked about the final-lap battles. “It was a very difficult race for me to race on with an engine issue, so we were losing quite a lot of power down the straights.

“Seb managed to pass us in the middle of the race and I knew these last two laps would be very difficult with Charles behind.

“With every braking [zone], I wasn’t sure if I was going to stop the car but I had to go for it – I really wanted that podium. It just feels incredible after such a good weekend.”

With Yuki Tsunoda making it a double points finish for the Faenza-based squad, Gasly said there may well be a party in the AlphaTauri garage.

“[We got] some really good points, Yuki had a very good race as well. All in all, a fantastic job and hopefully we can celebrate all together tonight.”