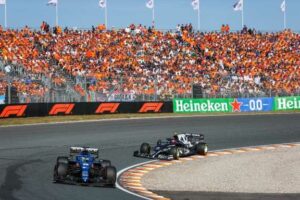 Pierre Gasly believes it is still very much game on between Alpine and AlphaTauri to finish fifth in this year’s Constructors’ Championship.

Understandably, attention in F1 is mainly focused on the head-to-head battles between Mercedes and Red Bull for the 2021 titles, and McLaren and Ferrari to finish third.

Further down, positions seven to 10 look fairly well set barring some highly unexpected results, but it remains wide open for who will complete the top half of the teams.

Alpine currently hold that status with 104 points, 10 ahead of AlphaTauri, but with five races remaining there is ample opportunity for that to change.

Heading into the Mexican Grand Prix, Gasly is certainly optimistic that his team can catch up – especially if they turn their impressive qualifying form into better race performances.

“Even with two DNFs in the last four races, the fight for fifth place in the championship is still very much on,” said the Frenchman in AlphaTauri’s preview of the race at the Autodromo Hermanos Rodriguez.

“It was a shame I had to retire in Austin [last time out] as we could have got both cars home in the top 10 and made up a couple more points to Alpine.

“But overall, it was a strong event with both cars in Q3, clearly outperforming Aston Martin and Alpine all weekend.”

AlphaTauri’s prospects of overhauling Alpine were done some good with Yuki Tsunoda scoring his first points since the summer break by finishing ninth, whereas Fernando Alonso and Esteban Ocon joined Gasly as the three drivers to retire.

Gasly has already discussed how he expects the next phase of the calendar to be “brutal” with a triple-header stretching across North and South America and the Middle East between now and November 21 – and has described how he plans to tackle it.

“It is the first time we have travelled this far from home for a couple of seasons,” observed the winner of the 2020 Italian Grand Prix.

“Rest, recovery and sleeping well will be important because it will be quite complicated with all the different time zones.

“Since Austin, I returned to Europe to go on the simulator, so I’ve crossed the time zone again. It’s important to be at 100% for each of these races.

“The other important factor is that some of the upcoming circuits will suit us better than others.

“The last time we came to Mexico in 2019 I finished ninth. It’s the sort of track where you have to be on top form, especially with the altitude which makes things more complicated.

“You certainly feel it if you go running, but when you are in the car you don’t notice, although it does put more of a strain on the car, the power unit, the brakes, in fact any part where cooling is required.”