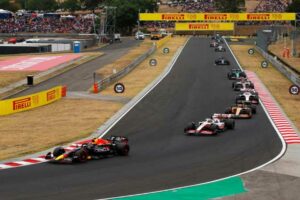 Pirelli have firmed up their tyre compound selections for the next three races of the 2022 Formula 1 World Championship.

The tyre manufacturer has released its tyre compound plans for when F1 returns to action in late August, with the compounds for the next three races confirmed.

The Belgian Grand Prix at Spa-Francorchamps will utilise the same compound range as used in France and Hungary, with the middle of the Pirelli range being brought: the C2, C3, and C4.

F1 returns to Zandvoort in early September with the Dutch Grand Prix, with Pirelli opting for a step harder as a result of the high banked corners.

This means the teams will use the C1, C2, and C3 tyres as the Hard, Medium, and Soft. This compound range was last used for the British Grand Prix, with only Spain and Bahrain also seeing the appearance of the C1.

For Monza, the final European round of the season, Pirelli once again bring their mid-range compounds with the C2, C3, and C4 as their elected choices.

Why are there different compounds?

While F1 uses a ‘Soft’, Medium’, and ‘Hard’, easily identified by use of red, yellow, and white sidewalls markings for the respective compounds, these are chosen from a range of five different compounds offered by Pirelli.

Depending on the nature of the circuit and certain factors, such as the abrasiveness of the asphalt, cornering speeds, expected temperature and tyre wear, and degree of banking, Pirelli weigh up which are the most suitable compounds to bring to each circuit.

This means that, for high-wear circuits such as Silverstone or Barcelona, the toughest compounds are required. This is in stark contrast to the far less demanding surfaces such as Austria and Azerbaijan, while low-speed circuits such as Monaco also allow for use of the C5.