Pole-sitters Ferrari 'don't have pace to win' in Baku 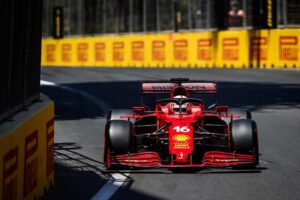 Ferrari are pessimistic about the prospect of winning the Azerbaijan Grand Prix despite clinching pole position with Charles Leclerc in Baku.

In a season where Mercedes and Red Bull are acting as the main protagonists in the 2021 season, the last two pole position fights in Monaco and Baku have gone Ferrari’s way – although both of Leclerc’s P1 spots were confirmed by crashes before the session was over.

Even though there is a little asterisk to Leclerc’s poles, there is no denying that Ferrari have taken a significant step forward following their lowest Constructors’ Championship finish in 40 years last season.

But, despite the progress, Ferrari do not think they have made enough progression to hold off Mercedes and Red Bull at the Azerbaijan Grand Prix.

“We expect a tough fight because we believe we will not have the pace to fight for the win,” Ferrari’s sporting director Laurent Mekies told reporters in Baku.

“So it’s going to be a defensive race.

“[But] I think it’s a good feeling to get the second pole in a row.

“It’s good for the team, the team is very focussed developing every race, building up every race. And it’s good to get this sort of result to construct what we are trying to construct.”

That last sentiment was echoed by Ferrari team principal Mattia Binotto, who has now stepped away from the pit wall in a Scuderia reshuffle.

“So it’s a real pole, a pole that is the result of a good performance.

“Here there’s a long straight, different conditions, so we were cautious because for our simulations we didn’t expect to be so competitive this weekend.

“That being said, we knew to be in good shape, the team is [in good shape] as well. I believe it’s encouraging, this is a team that can do well, also looking to the future. It’s proving we keeps growing.

About the race itself, Binotto added: “It will be a very tight race, for everybody. Usually here in Baku everything can happen, incidents, red flags, and Safety Cars.

“I think there are opportunities for both who is ahead and who is behind. So Carlos as well can do a really good race. It will be important to handle the tyres, and to pick the opportunities that the race will offer from a strategy point of view.”