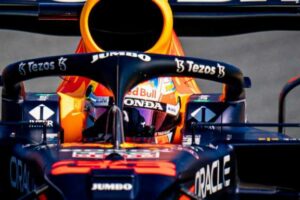 Max Verstappen will start the Dutch Grand Prix from pole position while Williams went from the podium at Spa to the barriers at Zandvoort.

The Dutchman was the star of the show in qualifying, cheered on by an army of Dutch fans decked out in orange, and laid down a 1:08.885 to grab pole position ahead of the Mercedes drivers.

His title rival Lewis Hamilton, who has a three-point advantage in the standings, will join him on the front row of the grid with Valtteri Bottas P3.

Verstappen will have to battle both Mercedes drivers alone come Sunday’s race, his team-mate Sergio Perez down in 16th place.

Ferrari faced a daunting task in the break between sessions to repair Carlos Sainz’s SF21 in time for Q1, the Spaniard having crashed heavily in final practice. And while team boss Mattia Binotto didn’t sound very hopeful 30 minutes before the session began, Sainz was one of the first to take to the track in qualifying.

While he was down in P18 after his first run, and in the drop zone, he bounced back late in the session to finish P2 behind his team-mate Charles Leclerc. The Monégasque driver topped the timesheet with a 1:09.829, 0.193s up on his team-mate while Max Verstappen was third.

It proved to be a mixed session for Red Bull as while Verstappen made it through with ease, his team-mate Sergio Perez dropped out, only 16th fastest. He was one of two big shocks, the other being Sebastian Vettel in P17.

While Vettel was blocked by Nikita Mazepin, the Haas driver moving to the inside of his team-mate only to get in Vettel’s way with the stewards investigating both Haas drivers, Perez didn’t cross the line in time to do a final lap, caught up in the traffic jam that was the Zandvoort circuit.

Vettel (P17) tried to get another flying lap in at the end of Q1 but hit traffic with not one but two Haas cars #DutchGP 🇳🇱 #F1 pic.twitter.com/y8EQh7O607

They went out along with Robert Kubica, who is replacing Kimi Raikkonen at Alfa Romeo for the weekend, Mick Schumacher and Mazepin.

Q2 once again saw Ferrari take the fight to Verstappen and Lewis Hamilton with Red Bull driver quickest with a 1:09.071. Leclerc lined up P2 ahead of Hamilton. And then came the red everyone knew would eventually come.

George Russell lost the rear of his Williams, the Brit sliding through the gravel and up towards the barrier at the final corner. Hitting the barrier with his rear-right tyre, the red flag was immediately thrown… and Russell, who’d kept the engine running, made his way back to the Williams garage.

Russell slides into the barriers

He manages to get going again, radios his apologies to the Williams team and heads back to the pits #DutchGP 🇳🇱 #F1 pic.twitter.com/Ia3t1c2OnE

“I just pushed it too hard. Sorry about that,” he told the team. Rear suspension damage meant he did not get back out when the session resumed but Nicholas Latifi did… and then he crashed.

Pushing hard as he had a chance to final out-qualify Russell, Latifi touched the gravel and lost the rear of his Williams into Turn 8, rear ending the barrier at pace. It was a hard lick. “Yeah I’m fine,” he told the team.

With Race Control announcing the session would not resume, Lance Stroll, Lando Norris and Yuki Tsunoda found themselves out of qualifying along with the Williams team-mates.

Nicholas Latifi has a nasty shunt and brings out another red flag. "I'm fine," he reports on team radio. The session will not resume. #DutchGP #WTF1 pic.twitter.com/uNEG0PstaE

Daniel Ricciardo was the first man out on track in Q3, the rest of the top ten making a slow exit as they tried – from the very get-go – to create gaps for their laps. The McLaren driver did a 1:10.5 but that was blitzed by Verstappen with a 1:08.923. Bottas was 0.299s down on the Red Bull driver, and Hamilton was even slower.

The traffic on the pit exit once again caused headaches for the teams with Fernando Alonso taking his time as he tried to build a gap – “standing still on the pit exit” complained Verstappen. That put time pressure on those at the back of the train, Hamilton the 10th of the 10 cars. He crossed the line in time with about eight seconds to spare.

Verstappen upped his pace to a 1:08.885 with neither Bottas nor Hamilton able to challenge. The Brit did at least leapfrog his team-mate for P2. Pierre Gasly will line up P4 ahead of Leclerc and Sainz.