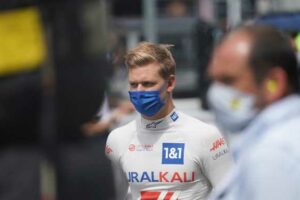 Ralf Schumacher doubts Alfa Romeo is a “better option” than Haas for his nephew Mick, with the latter team “not far” from confirming their 2022 line up.

Mick Schumacher entered Formula 1 this season with Haas, well aware that it would be a difficult season with the team saying from the get-go they would not be spending massive amounts to update the car.

Instead the full focus would be on getting Schumacher and his rookie team-mate Nikita Mazepin up to speed, while putting all their design efforts into the all-new 2022 car.

As such Haas are at the very bottom of the standings, even behind Williams, with Schumacher’s best result to date a P13 at the Azerbaijan Grand Prix.

This has led to speculation that he could step up to the either Ferrari-powered team in 2022, Alfa Romeo.

The 23-year-old didn’t deny that it was a possibility when recently questioned by Sky Germany.

“I am living in the here and now,” he said of the rumours.

“I haven’t thought much about next year. We’ll see what happens in the end. I’m sure you’ll hear if something happens.”

However, his uncle Ralf wonders if swapping teams so early in his career is the best option for the youngster.

Speaking to Sky Germany, the former driver turned pundit said: “There were also rumours recently about the future of Mick Schumacher, who was linked to a move to Alfa Romeo.

“I can only speculate because I don’t know anything about it.

“Would a change make sense? If he had the chance to drive for an absolutely top team, it would be a great opportunity for Mick. On the other hand, he can still learn a lot at Haas. Whatever he does and has already done.

“If Haas continues to develop and the new car is a step forward, it would make perfect sense for Mick to add another year. You shouldn’t underestimate that a young driver easily needs six months to establish himself in the team and get the most out of it.

“I’m not sure if Alfa Romeo is really the better option. Working with Ferrari is important. It seems to work well – even with the current team.”

“The silly season has just started,” he said.

“We still have to look at a few things, but we are not far from confirming our drivers for 2022.”