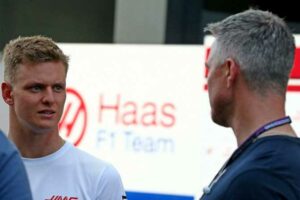 Ralf Schumacher believes his nephew Mick is an “attractive” option for Aston Martin, but says they are not the only team with an eye on the German.

Schumacher is out of contract with Haas at the end of this season with team boss Guenther Steiner recently warning his driver that there is a “queue” of hopefuls wanting his seat.

That warning came in the wake of Schumacher entering the top-ten list for the most F1 starts without a single point, which he did so in Miami when his tally reached 26.

It’s now up to 27, the German unable to covert his top-ten grid slot at the Spanish Grand Prix into a points-paying position.

With Haas yet to decide if they want to continue with the driver, Motorsport.com has reported that Aston Martin may yet steal him away and sign him as Sebastian Vettel’s replacement.

Ralf believes his nephew is an attractive option for many teams who have noticed “how long it takes for a driver in F1 to get to a certain level”.

He added to Sky Deutschland: “It’s still the case that a driver at that young age with two years of F1 experience already has value in Formula 1.

“I don’t think it’s just Aston Martin who are interested in him.”

But with Aston Martin team owner Lawrence Stroll confirming that talks have been held with the incoming Audi brand, Ralf reckons that Schumacher is German will make him an even more attractive option.

Ralf added: “You shouldn’t forget the German component, Audi will be there. Lawrence Stroll could have the plan to make the package even more attractive for Audi, because Audi definitely wants a German driver.”

According to the Motorsport.com report, Aston Martin also want improve their sales in Europe by focusing on the German market, so see having a driver from that nation, and with the surname of its most famous racing driver, would be a strong marketing tool.

But Schumacher leaving Haas is by no means guaranteed, although pressure is mounting on the point-less German.

He does, however, have one big thing in his favour when it comes to staying with Haas, they have to put one Ferrari-backed driver in the car.

Team boss Steiner confirmed that to F1-Insider.com: “According to the contract, we have to fill one of our two driver seats with a Ferrari driver.”

Ferrari, though, do have juniors waiting in the wings in Robert Shwartzman and Callum Ilott, the latter said to have taken a gap from the Ferrari junior academy to race in IndyCar.

In Formula 3 they also have Charles Leclerc’s brother, Arthur, as well as Oliver Bearman.