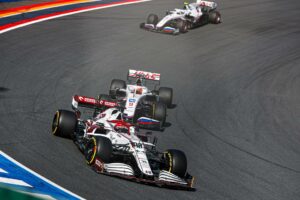 For the first time in 11 years, Robert Kubica was able to take the fight to other drivers in his appearance at the Dutch Grand Prix.

Kubica started his 98th Formula 1 race at the Dutch Grand Prix as the replacement for Kimi Raikkonen, with the Alfa Romeo driver forced to miss qualifying and the race after testing positive for Covid-19.

It marked Kubica’s first qualifying and race appearance since 2019, but as that season was contested with a struggling Williams team he rarely got the chance to test his skills against anyone other than his team-mate for that year, George Russell.

And so after getting involved in the action on his way to a P15 finish, Kubica felt he had ended an 11-year wait to battle in a Formula 1 car again.

Asked about the Dutch GP experience by reporters, Kubica said: “Demanding as expected. I met shortly before the race with George and he said ‘how is it?’ I said ‘well, it will be tough’, and he said ‘it’s probably the toughest track physically’.

“And considering the long break I had, I think from a physical point of view it wasn’t easy, which is normal.

“It was not easy to handle everything, but honestly I will go home satisfied about today.

“Finally today I had a few battles, which the last time I probably I had the car to fight was 11 years ago in Formula 1 because in the end 2019 was more survival than enjoying.

“So I did have some nice fights with Seb [Vettel], defending, and then trying to catch [Nicholas] Latifi, managed to overtake him on the last lap.

“So all in all, of course you could do better, but it has been a demanding Sunday for me.”

So now he has received a taste of that Formula 1 action again, could we see Kubica asking for more?

The Polish racer was giving little away but spoke of knowing his “limits”, suggesting a full-time return was not of interest.

“I’m realistic and I know what is my position, I know my limits,” he confirmed.

“Formula 1 presents the biggest challenge and the highest motorsport category. But I’m with my feet on the ground as always, and for me it has already been a great opportunity here.

“We can say Poland had three Formula 1 drivers in the last 15 years – it was all with the same guy but coming back two times, so we will see.”

For Antonio Giovinazzi in the other Alfa Romeo it was a torrid afternoon, for his hard work to qualify P7 was undone come race day largely due to a puncture after his first pit-stop.

“The start was okay, then we were three wide after Turn 3 and I found myself on the outside, me and Fernando [Alonso] hit each other,” he told Sky Italia.

“But in the end we were P10, then after the first pit-stop I had a puncture immediately. So I had to do another pit-stop and with an extra pit-stop the race was over.”