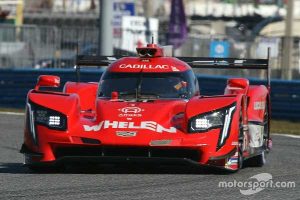 Polesitter Felipe Nasr took his Action Express Racing Cadillac into the lead at the start of the race, but there was trouble for both the Mazda Prototype and the sole GT Le Mans-class Porsche.

The #31 Whelen Engineering car held off Loic Duval in the JDC Miller Motorsports car at the start, with Dane Cameron running third in the Meyer Shank Racing Acura ARX-05 until Lap 4 when he moved past Duval for second, by which time Nasr had pulled a 3.4sec lead.

However, Cameron then slipped up and was shuffled down to fourth behind Renger van der Zande in Chip Ganassi Racing’s Cadillac and just ahead of the second Acura, the Wayne Taylor Racing entry piloted by Felipe Albuquerque. NASCAR legend Jimmie Johnson ran sixth in the second AXR Cadillac.

The Mazda RT24-P of Oliver Jarvis was hobbled from the off by being unable to select first gear, and the white #55 is now scything through the pack.

Moritz Krantz leads LMP3 for Muehlner Motorsports ahead of Ryan Norman of Forty7 and Rasmus Lindh of Performance Tech Motorsports. Following a restart, Krantz and Norman collided, which sent both of them limping to the pits, and leaving Lindh in front.

However, Kevin Estre’s WeatherTech Racing Proton Porsche 911 RSR was struck hard by Bruno Spengler in the second M8 at the drop of the green, which spun the Porsche, and broke its rear bumper, which gradually disintegrated, leaving debris around the course and enforcing a full course yellow.

Poor Estre had to pit for a replacement and remains there 30mins in, while Spengler was given a drive-through penalty as culprit.

Then Milner suffered an electrical issue that needed a reset and he fell to fourth in class, while IMSA Radio reports that Risi has a spare door ready for its 488 after it was struck by the spinning Porsche.