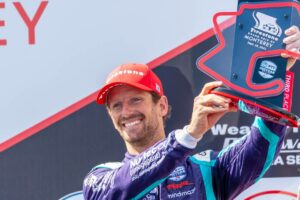 Romain Grosjean’s anticipated move to Andretti Autosport for the 2022 IndyCar season has been confirmed.

And the Frenchman will be joined by another fellow European single-seater racer making the move Stateside as Callum Ilott has been signed for a full campaign by the Juncos Hollinger team.

After his Formula 1 career was ended by that horrifying fireball crash in Bahrain last November, Grosjean has made a success of his switch to the IndyCar series.

Competing for the Dale Coyne Racing with Rick Ware Racing team, the 35-year-old has recorded three podium finishes and his driving style has earned him a new legion of fans.

Andretti Autosport were reported to be interested in his services for the last couple of months, and a deal has now been finalised on the eve of the 2021 season’s final weekend.

“I’m delighted to be joining Andretti Autosport and driving the No 28 DHL Honda for next season,” said Grosjean – who replaces Ryan Hunter-Reay in that car – quoted by The Race.

“It’s a big honour to be joining such a great team as Andretti. Anyone in the motorsport world knows the name Andretti. I’m super-happy and proud to be racing with the team.

“I hope we will be very successful together, which is our aim on every side.

“I would like also to thank Dale Coyne Racing for giving me the opportunity to join IndyCar. I’ve enjoyed the racing so much and it’s given me the change today to be racing with one of the most competitive and best teams in the world.”

Meanwhile, 2020 Formula 2 runner-up Ilott is making a full-time switch to IndyCar next year with Juncos Hollinger, with whom he is completing this season’s action by taking part in the last three races.

The 22-year-old Briton made his debut in Portland and improved three places on that bow when he was 22nd next time out at Laguna Seca.

“Coming into the final weekend of our three-race run on the west coast, it’s great to announce I will be continuing next year with Juncos Hollinger Racing for the 2022 season,” said the Ferrari Academy driver.

“Obviously we’ve had a steep learning curve the last few races to try to put everything together. We’ve had some real positives and know the things we need to work on. I definitely feel we can put ourselves in a great position to start off the 2022 season strong.

“I look forward to continuing the work we are doing and heading into the winter to start a new journey over here, and I would like to thank the Ferrari Driver Academy for allowing me to take this opportunity.”