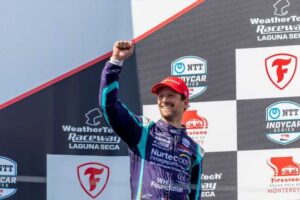 Romain Grosjean says that due to its freedom and competitiveness, he “fell in love” with IndyCar during his rookie season.

The Frenchman made the move to the American series after being dropped by Haas from the end of the 2020 Formula 1 season, and enjoyed an excellent first season.

Driving for Dale Coyne Racing, he finished on the podium three times and also claimed one pole position in the 13 rounds he took part in this year.

He has gained a huge number of plaudits in the US, not only because of his strong results but for his driving style too, with the 35-year-old pulling off a number of thrilling overtakes.

He says he is loving his time there because he has the freedom to drive in such a way and the machinery to fight at the front.

“I fell in love with IndyCar,” said the 35-year-old after finishing P3 in the penultimate race of the season.

“As a driver, I have a lot of freedom with my driving style and can be competitive in any team.”

Grosjean’s strong performances have earned him a move to Andretti Autosport for the 2022 campaign.

There, he will surely have a much better chance of fighting for wins and championships given the team claimed victory on three occasions and had one of their cars finish P5 in the standings courtesy of Colton Herta.

Grosjean says he is proud to be racing for such a famous name in the world of motorsport and is aiming high.

“I’m delighted to be joining Andretti Autosport and driving the No 28 DHL Honda for next season,” said Grosjean – who replaces Ryan Hunter-Reay in that car – quoted by The Race.

“It’s a big honour to be joining such a great team as Andretti. Anyone in the motorsport world knows the name Andretti. I’m super-happy and proud to be racing with the team.

“I hope we will be very successful together, which is our aim on every side.

“I would like also to thank Dale Coyne Racing for giving me the opportunity to join IndyCar. I’ve enjoyed the racing so much and it’s given me the chance to be racing with one of the most competitive and best teams in the world.”