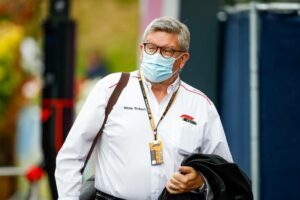 Ross Brawn believes it will be a “glorious year” for Formula 1 after seeing the 2022 regulations in effect during a race for the first time.

The Bahrain Grand Prix was the first time those within the sport and on the outside were able to see the differences the overhaul in regulations has caused, and it was particularly noticeable in terms of drivers being able to race close together.

Leader Charles Leclerc battled with reigning World Champion Max Verstappen as both cars were able to overtake each other in quick succession.

The Ferrari man went on to win after the Red Bull driver had suffered car troubles, but the battle was a promising sign of what could be in store this season.

Speaking to Sky Sports F1 post-race, Brawn, the motorsports managing director of Formula 1, said they were “delighted” with what they had seen.

“It’s the first race so we have to be careful, but all the signs are that we’ve moved in the direction we’ve wanted to move in, and the ability of cars to race each other, from what we’ve seen, is improved,” said Brawn.

“I think in the past we’ve always focused on cost, safety and performance – now we should focus on raceability.

“That should be in there as well because there’s never been any attention paid to it. We need to do that now, we need to do it in the future.

“We could see from previous cars you could simply see the downforce, or the aerodynamic performance of the cars following degrading hugely behind another car.

“So we can’t see the data because we are the commercial rights holder, but the FIA will now look at all the data of the cars and from that, put that into the research programmes to see how we improve it further. But I think anecdotally you can see the cars could race a lot better.”

Brawn also said he was pleased there were not too many surprises, which can happen after a regulation change.

“Luckily, I must say, not too many surprises because when you introduce new regulations – obviously I was the poacher a few years ago – you can have big performance differences when you get going again.

“What I’m very pleased about is the changes we’ve made. We’ve managed to place restrictions in certain areas that have meant the field is quite close.

“There’s a few teams that have got it wrong and I’m sure they will come back quite quickly, but at the front I think we’ve got three really strong-running teams.”

Brawn, who spent nine years at Ferrari, said it was “pleasing” to see his former team back at the top of the grid.

“It looks like Red Bull will get a bit more competitive [and] find a few tenths. I’m sure Mercedes will sort themselves out. I think we will have a glorious year.”