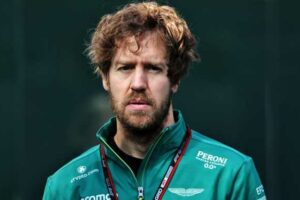 Sebastian Vettel may not return for the Saudi Arabian Grand Prix as Aston Martin remain unsure if the driver will be cleared in time following his positive Covid test.

The four-time former World Champion was forced to sit out the season-opening Bahrain Grand Prix after testing positive for Covid in the lead-up.

His fellow German Nico Hulkenberg stepped in, struggling to a 17th-placed finish, and Aston Martin are unsure whether Vettel will be cleared in time to race this weekend in Saudi Arabia.

“He was participating in the debrief, sounding less rough than a couple of days earlier,” said Aston Martin team principal Mike Krack, as reported by motorsport.com.

“But we don’t know. We will see how he goes for the next days. We hope he will be back soon.”

In order to be able to race, Vettel will have to pass both the Saudi Arabian quarantine rules as well as the internal ones set at Aston Martin.

These two gave it everything out there tonight. It's not been an easy weekend, but they kept fighting to the very end – and that's what we'll keep doing, together.#WeClimbTogether pic.twitter.com/GLOyI1NcR5

“If he has a negative test, it will be easy. Better to get it now than in two weeks’ time.”

Hulkenberg is also unsure whether he will be racing having made his return for the first time since 2020.

He was asked by motorsport.com whether he had any indication if he would be racing in Jeddah and replied “No, not yet. I don’t know.

“I’m just going anyway on standby and as a reserve, and I guess we’ll find out on Thursday or Friday.”

It was a difficult opening weekend for Aston Martin with Hulkenberg and Lance Stroll finishing 17th and 12th respectively.

On his troubles, Hulkenberg said he was “hanging on” during the race.

“It was very difficult, in combat mode,” he said.

“The beginning was okay. But I was just hanging on – it was tough for me.

“Once you are out of that mode of just running with new, fresh tyres and know the limitations become more, you have to manage and understand the car a lot more. So that was difficult.

“[It was a] big learning experience. So we went okay, I think then I tried to overtake someone, outbraked myself a bit into Turn 1. And from there onwards, it was kind of a downward spiral.

“I got lapped quite soon, and you just fall back and back more and more. But it was what it was.”