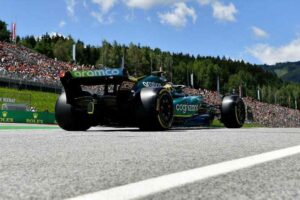 After a third double-Q1 exit on the bounce for Aston Martin, Sebastian Vettel says the pace simply was not there in Austria.

One-lap pace has been a real struggle for Aston Martin recently, both Vettel and Lance Stroll eliminated from qualifying after Q1 at Silverstone, as they did at the Canadian Grand Prix before that.

So it was a trio of double Q1 eliminations as Vettel dropped out of Austria qualifying in P20, his final time deleted due to track limits, while Stroll managed only P17 in that Q1 session.

Nonetheless, Vettel’s time would not have been good enough to escape Q1 on an afternoon where he bluntly claimed Aston Martin were “just slow”.

A tough qualifying session with both cars eliminated in Q1.

We'll get our heads down tonight to be ready to push hard in the #F1Sprint. Tomorrow is a new day. 👊 #F1 #AustrianGP pic.twitter.com/xxDm7nYfdC

Asked by reporters about that deleted lap time, Vettel replied: “We were just slow, it’s obviously quite harsh, I lost some time in the first corner so, double penalty because we also lost the lap.

“But obviously not a great session for us.”

As for whether there was any explanation for the poor pace, Vettel said: “No, obviously very poor and we were weak throughout the session, so obviously disappointed.”

Stroll saw multiple lap times deleted for track limits during the session as the stewards clamped down on violations.

He did not though try to use that in any excuse, instead backing Vettel’s claims that the AMR22 was simply not good enough to progress.

For Stroll, that was his sixth Q1 elimination in a row.

On the subject of how tricky it was to adhere to track limits, Stroll said: “Yeah it was tricky for sure, same for everyone, it’s always a challenge here.

“So when you are dealing with all of that stuff it is always challenging.”

The positive for Aston Martin is that their race pace has often been stronger, and since this is a sprint qualifying weekend, it means that the team will have two opportunities to make up for their latest poor showing in qualifying.

“We are obviously going to try and recover in the sprint and then try to get ourselves in a good place for Sunday,” Stroll confirmed.