Home » Racing » Sebastian Vettel out of the Bahrain GP, Hulkenberg steps in

Sebastian Vettel out of the Bahrain GP, Hulkenberg steps in 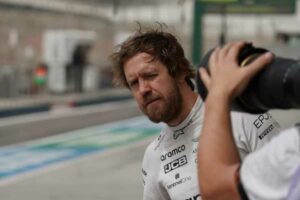 Sebastian Vettel will miss the Bahrain Grand Prix after testing positive for Covid-19.

Just 24 hours before the first practice session of the new 2022 championship Aston Martin have announced that Vettel won’t line up at the season-opener.

The 34-year-old has tested positive for Covid-19, but that was all Aston Martin said about his health in their brief statement, the team not revealing if the driver is feeling unwell or is asymptomatic.

They did confirm his replacement with reserve driver Nico Hulkenberg stepping in.

UPDATE: Sebastian Vettel has tested positive for COVID-19 and will therefore not be taking part in the 2022 #BahrainGP.

Replacing him in the AMR22 will be Reserve Driver @HulkHulkenberg, who will be in the car from FP1 onwards. #F1 pic.twitter.com/36wnI8LUAC

The race weekend will be Hulkenberg’s first since 2020 when he showed himself to be a super sub when he stood in for first Sergio Perez, doing so twice, and then Lance Stroll at the Silverstone team.

The German scored 10 points including an impressive third place in qualifying for the 70th Anniversary Grand Prix at Silverstone.

Despite his performances he was not able to secure a drive for the 2021 season, and, after again falling short in 2022, declared that he was done chasing a Formula 1 race seat.

The former Renault driver will make his 180th grand prix start on Sunday still looking to break his podium duck.

Speaking prior to his positive test, Vettel had said he hoped this season would see a marked improvement from Aston Martin.

“Everything is new in Formula One and I think we’re looking at a very tight battle, and some very close gaps, between all the teams,” he said. “There’s a lot to play for – and that’s F1 at its best.”

Vettel is the second driver in the past two weeks to test positive for Covid-19, Daniel Ricciardo forced to miss all three days of the pre-season test at the Sakhir circuit.

He has, however, now recorded a negative test and will be in the car for Friday’s practices.