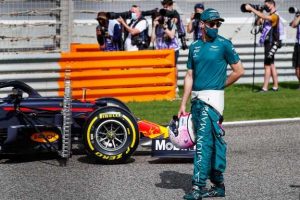 Sebastian Vettel‘s helmet for the 2021 season has been unveiled, and there is an important message behind its pink design.

Vettel took to the Bahrain International Circuit on Friday morning for pre-season testing in the AMR21, the first car of the new Aston Martin era in Formula 1.

They have undergone their transition from Racing Point in the close season, and just one of their many changes was the arrival of four-time World Champion Vettel, who joined from Ferrari.

F1 fans have become accustomed to seeing the German with a white helmet which sported the stripes of his country’s flag, but when he stepped out on the track earlier this morning, people quickly noticed his new lid showing the BWT pink which was so familiar with the Racing Point brand.

BWT, an Austrian water treatment company, no longer have the same amount of visibility on the Aston Martin car as they did under the team’s former identity.

So they instead have teamed up with Vettel himself to highlight the importance of their campaign’s message.

The rear of his helmet now reads “change the world, sip by sip”, which is a nod to their initiative to reduce the unnecessary transport of water bottles and to reduce the use of disposable plastic bottles.

You may have noticed something a little special…

Introducing Sebastian's 2021 lid. It has one goal, to raise awareness of sustainability. 🌍 💚 #SV5 pic.twitter.com/cag5pNRcKF

Speaking about the new deal, Vettel told the Aston Martin website: “The future is important and we must do our best to protect the planet for children and young people. We all share this responsibility and if we come together we can make a difference.

“As a Formula 1 driver, I think it’s right to speak up on this subject and have my voice heard. I am pleased to have found a partner in BWT that shares the same perspective and goals.

“By cutting down the amount of plastic waste, we can make the world a little better, sip by sip.”

Part of the Aston Martin driver’s partnership with BWT will see the conversion of schools into “BTW Bottle Free Zones”, which will allow children to drink more sustainably.

Lutz Hubner, BWT’s CMO, added: “With Sebastian, we were able to find the ideal ambassador who perfectly represents our mission – to make the world a little bit better, sip by sip.

“Sebastian is not only an outstanding athlete but above all a great person with principles, a clear opinion and civil courage.

“Together with him, we are going to make a lasting contribution to the preservation of our planet.”