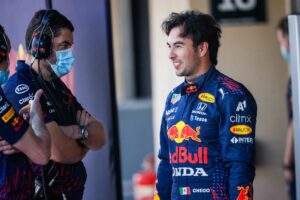 Left without a seat at the end of 2020, Sergio Perez admitted retiring from Formula 1 crossed his mind – before Red Bull came along.

Perez’s time at Racing Point [which was to become Aston Martin], was about to come to an abrupt end after the team signed Sebastian Vettel to partner Lance Stroll, which left Perez searching for a drive for 2021 with Red Bull being his only possibility as the season ended.

Alex Albon was given the opportunity to make his claim to keep his seat, but Red Bull ultimately chose the Sakhir Grand Prix winner instead and Albon dropped to a reserve role.

Having played second fiddle to Max Verstappen in 2021, Perez is keen to mount a title challenge of his own in the upcoming season – but he was asked about a key highlight of his first year at Red Bull: getting on the podium at his home race in Mexico.

The home crowd roared him on all weekend and there were rapturous scenes as he finished P3, and he described the day as being “very special” – which was quite the comeback from considering leaving Formula 1 around that time in 2020.

“That was a very nice moment for myself [and] for my career because I had all of the people that had been with me since day one,” Perez told TAG Heuer’s ‘The Edge’ podcast.

Checo's Red Bull debut was another 2021 #F1 moment which may have fallen under the radar:

He was thrown in at the deep end, but handled it superbly 👏 pic.twitter.com/QUIsXfs0nG

“And you cannot forget the fact that last year, I didn’t have a drive. I would probably have ended my career in Formula 1 if Red Bull didn’t give me the opportunity.

“Just to have all my fans, my crowd, my family, all of the people that have been with me since day one, Carlos Slim, my main supporter of my career since day one, gave me the trophy so it was very unique and a very special moment for both of us.

“It was great, but it is not enough. I want to win my home grand prix one day.”

Perez took his first Red Bull victory in Azerbaijan, after Verstappen’s late tyre blow-out on the main straight in Baku. But having been at a low ebb when he was without a drive, he admitted that more lessons are taken from adversity in a driver’s career than in success.

“I always think you learn more from the bad times, and the most important thing is not to give up and always look ahead,” Perez said.