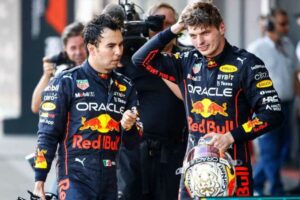 Red Bull told Sergio Perez not to fight as Max Verstappen took the lead from him in Baku, a call which Perez felt was right to make.

The Spanish Grand Prix gave a clear indication of Perez’s role in the team, told to yield to his team-mate Verstappen who went on to win the race.

The following round in Monaco complicated matters though, Perez taking the victory to at that time close to within 15 points of Verstappen in the Drivers’ Championship, putting him firmly back in the title fight.

Team orders returned though for Baku, Perez told “no fighting” as Verstappen closed in and sailed past him into Turn 1, that relinquish of the lead once more turning into a victory for Verstappen, while Perez finished P2 and claimed the fastest lap, meaning maximum points for Red Bull.

In Spain, Perez was rather frustrated by Red Bull’s instructions, but this time around, he fully supported them.

With victory in Baku, @Max33Verstappen has moved into the top 10 on the all-time win list, joining Jim Clark and Niki Lauda on 25 races wins. #F1 pic.twitter.com/hzGVlZer4g

Asked if he was in a position to fight for the win when that call came, Perez replied: “I think it was a right call made by the team because at that time Max was a bit further ahead and it was just a good team result.

“And in this place anything can happen, so at the end of the day, we managed to get a one-two, so that’s a great team result.”

After making the pass easy for Verstappen, Perez was unable to close in on his team-mate again, allowing the Dutchman to romp to the finish line.

Perez revealed that his race became undone through a “miscommunication” when the Virtual Safety Car was triggered, Red Bull missing that prime opportunity to pit Perez.

“Unfortunately we missed the Virtual Safety Car stop,” said Perez. “There was some miscommunication and once we wanted that [stop] it was a bit too late. We were a bit unlucky there because that would have made up our race when we were leading.

“And then at the restart I just keep to myself, I think on that medium tyre there what the deg that was extremely high for me, something that we have to understand what happened there because certainly Max was a lot stronger today I’ve seen.

“So yeah, a lot of things that we have to review for today, but it’s still a very good team result.”