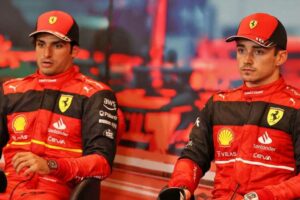 A portion of the Ferrari staff initially refused to attend the Silverstone podium following Carlos Sainz’s victory on Sunday, according to a former Scuderia team member.

The Spaniard won his first grand prix at the 150th time of asking but it came at the expense of Charles Leclerc who was once again left to question his team’s strategy decisions.

Three months on from his last win, the 24-year-old saw another victory slip through his fingers when Ferrari refused to allow him to overtake Sainz early on in the race.

His misery was then compounded further when the team twice failed to bring him in for fresh tyres during a Safety Car period.

Now a report has emerged that a section of the Ferrari garage initially refused to attend the podium ceremony and the following photo shoot.

According to former Ferrari press officer Alberto Antonini, a source told him that the staff initially did not want to celebrate the race win.

“I have been told – and I trust the source – an ugly episode that occurred in the immediate aftermath of the Silverstone race,” Antonini wrote on formulapassion.it.

“Part of the Ferrari staff allegedly refused, at least initially, to attend the podium ceremony and photo op. If true, as I fear, this is not a good sign.

“A little healthy rivalry inside the garage is fine, it is fine for each mechanic and each technician to cheer for ‘his’ driver, but the common interest must be to aim to win.”

Leclerc may have told the media he was okay with the team’s decisions but the cameras caught him receiving a visual telling off from Mattia Binotto in which the Ferrari boss wagged his finger at his driver.

The Monégasque tried to play down the incident as Binotto just wanting to cheer him up but F1-driver-turned-pundit Jenson Button did not believe it.

“I always cheer my friends up with a good finger wag,” Button joked on Sky Sports F1.

“It’s a tough race for him. He broke his wing on the first lap of the race in turn four with Checo, but he had good pace still.

“He was pushing his team-mate round and in the end they swapped them over, gave him the lead, but the bad pitstop call at the end there with the Safety Car. It’s happened again, there’s the same thing in Monaco. So it’s tricky. I don’t know whose decision it was but obviously that cost him the victory.”