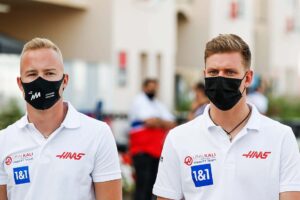 Haas boss Guenther Steiner is preparing himself for more incidents between his two rookie drivers, Mick Schumacher and Nikita Mazepin.

The aftermath from their near-miss at the end of the Azerbaijan Grand Prix, where Schumacher accused Mazepin of trying to scare him into the wall with a late move, has spilled over into the next round in France.

Schumacher is expecting a harsher punishment if Mazepin was to do the same again, but Mazepin has told his team-mate he will “never not block” and not to expect things to be easy against him.

Watching both sides of the Haas garage, Steiner predicts there will be more incidents and arguments to resolve as the season develops – not just this one.

“When they are out there, how should I keep them on a tight leash?” Steiner told reporters in France.

“Both of them are young and have an ego and they want to be seen to be strong so only the future will tell what is happening but I will not be driving the car.

“We agreed on some things and we just keep on going and hopefully it doesn’t happen again.

“Can I give you a 100 per cent assurance that it doesn’t happen again? No way. They are race car drivers. They are competitive people and there will be incidents again and we will deal with them again.

“Otherwise, it is getting boring anyway, but I hope they have learned a lesson out of this and at least we will have situations in the future but maybe not these ones.”

Steiner was even asked whether Ferrari would take Schumacher away from the Haas environment if there were more incidents with Mazepin, but he felt that question showed the situation is now being exaggerated.

“If it affects the future I don’t know, I don’t have a crystal ball and I think in racing this happens,” he replied.

“I think we are blowing this out of proportion here. I don’t think it was as bad as you all think it was.

“This is normal and it happens because in the moment our guys, they fight between each other. If it would have happened not to a team-mate it would have not created this much of a story.