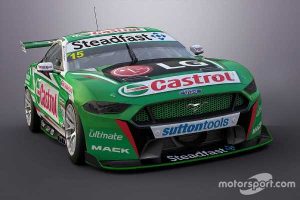 Supercars is expecting a Gen3 prototype to make its on-track debut mid-way through this year.

The series is well underway with the development of its new hybrid-ready ruleset ahead of its planned 2022 introduction.

Two models have already been confirmed, the Ford Mustang and the Chevrolet Camaro, while other snippets, such as potential moves to push-to-pass and paddle shifting systems, have been teased through supplier tenders.

The existing homologation teams, Dick Johnson Racing (Ford) and Triple Eight (GM), are working with Supercars’ own Gen3 committee on the project.

According to Supercars CEO Sean Seamer, the development work is on schedule and there is optimism a prototype will be ready for track testing by the middle of 2021.

“The [Gen3] team and the committee made fantastic steps through the course of last year,” said Seamer. “We’ve had a longer off-season than usual and that’s been put to good use.

“The latest update that I’ve got from the committee is that we can expect prototypes around the middle of next year. The team are working towards cutting laps in the middle of the year.

“There’s quite a few different work streams, with the development of the chassis, the CFD work on the aero package, the engine work that’s ongoing… it’s just trying to get the right balance between bringing the project to life and making sure that we’re not rushing things, that we’re able to put something on track that very closely represents what we’ll be racing next year.”

Seamer added that Supercars plans to be as transparent and public as possible throughout the development process in the first part of the year.

“We’ll be using different people to provide different updates over the course of the next few months, both in broadcast and digitally, to make sure we’re procuring as much information as we possibly can to take everybody on the development journey,” he added.

The Gen3 rules will focus on control parts amid a big cost containment push, with a sub-$350,000 price tag for a new car – complete with its V8 engine – the target.

The chassis will be lower and wider than it currently is, to be better fit two-door bodies, while the aero will be trimmed by as much as 200 kilograms.

There are also provisions for hybrid technology being built into the package, although traditional V8 power without electric assistance will be used for at least the first part of the 2022 season.