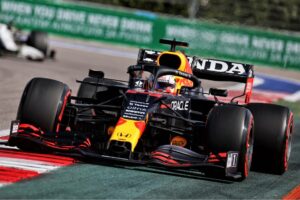 Max Verstappen has revealed the prospect of a wet qualifying session for the Russian Grand Prix had convinced Red Bull to take his engine penalty.

The Dutchman has had the penalty hanging over him since the summer break, with two Honda power units having been damaged in crashes at the British and Hungarian Grands Prix.

That left Verstappen needing new engine parts for the fourth time this season, which meant he would have to start a race from the back of the grid – the worst-case scenario in his World Championship battle with Lewis Hamilton.

Where to take the penalty, and limit the damage as much as possible, has been the subject of much discussion at Red Bull and they have opted for Sochi – where a wet Saturday has been forecast with some certainty.

If qualifying is affected by rain, it could produce an unpredictable grid for Sunday’s race and therefore lessen the chances of Mercedes duo Hamilton and Valtteri Bottas racing away to a likely 1-2 finish from the front of the grid while Verstappen fights his way through the field.

It also means the three-place grid drop Verstappen received for his Monza collision with Hamilton has been nullified.

Bottas and Hamilton were fastest and second fastest respectively in both FP1 and FP2. Asked if the result of the morning session had influenced the decision to take the penalty, Verstappen told reporters: “It was not only the result. As I’ve said before, we will always take everything into account.

“And with the [bad] weather [forecast] for tomorrow we have decided to take the penalty here.”

Taking everything into account, it was best to take the engine penalty here in Sochi. It will be a challenging race but so far I’m happy with today’s running and our work on the race set-up #KeepPushing 🇷🇺 #RussianGP pic.twitter.com/3ZUR4HePJW

Asked about his chances of carving his way through the field, the 23-year-old added: “Well in 2018, the gaps to the midfield were a bit bigger so hopefully it won’t be as difficult to come through.

“We had to take the penalty. If we hadn’t have taken it here, it would have had to have been somewhere else.

“So we decided to do it here and we’ll try to make the best of it in the race.

“We are just trying to work on the best possible set-up once we decided to take the new engine.

“Let’s just wait and see now what the weather will be.”

Hamilton, who still trails Verstappen by five points in the Drivers’ standings after both failed to finish the Italian Grand Prix when they collided with each other, recognised the opportunity both he and Mercedes now have to strike a major World Championship blow.

“It doesn’t really change anything for us,” said the Briton. “We’ve just got to do our thing and focus on moving forwards.

“It’s a tough year I think for everyone with reliability. It’s definitely a shame for him but we’ve got to try and capitalise on that naturally and try to get a maximum result.