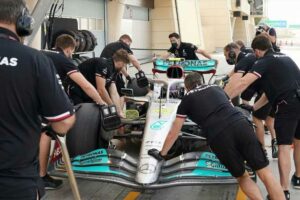 After a worrying pre-season, Toto Wolff says Mercedes and Formula 1 will finally see the “competitive truth” in Bahrain’s qualifying.

Mercedes left the Sakhir circuit after pre-season testing worried about their pace, both Lewis Hamilton and George Russell fearing the worst.

Their concerns have been laughed at by their rivals who say it is “typical” of Mercedes to talk down their own chances, and then blow the field away.

However, in the background it does seem as if perhaps Mercedes do have cause for concern, their W13 with its zero-pods suffering more porpoising than the other cars.

Mercedes had a few days between testing and this weekend’s opening race of the season, the Bahrain Grand Prix, to find a solution to the problem.

Wolff is in the dark as to how Hamilton and his new team-mate Russell will perform at the Sakhir circuit.

“It’s hard to say exactly where we’ll fit in the competitive order this weekend in Bahrain,” said the Mercedes motorsport boss, “but that’s what makes this new season and new era so exciting.

“It’s a clean slate for everyone and all to play for.

“Like we always say, what we love about F1 is that the stopwatch never lies – and we will get our first understanding of the competitive truth on Saturday in qualifying.

“I’m excited to see what the weekend has in store.”

The intent of the new regulations is to enable cars to follow each other far more closely thus improving the racing.

Wolff believes there is a lot more to come from the W13 with Mercedes still learning about the car.

“The start of a new Formula One season is always exciting, and this year more than most,” he added.

“”With new technical and sporting regulations, there is so much to learn and discover as this new season begins.

“Barcelona was a productive first test of the W13, then we brought a big update to Bahrain for the pre-season test which resulted from a huge effort by the whole team.

“We completed good mileage, had solid reliability, and learned a lot about our new car, but it was not a straightforward three days for us.

“We tried plenty of set-up options and made good progress in understanding our limitations, and there’s still plenty of room for us to improve further.

“There is a lot of potential to unlock in the W13, and we know how much we relish the challenge of understanding the car and extracting the maximum from it, and this will be our focus for the coming days, weeks and months.”