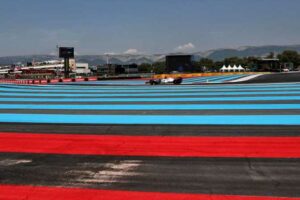 Mercedes team boss Toto Wolff has bluntly conceded after qualifying for the French Grand Prix that the Silver Arrows are not performing well enough.

With Mercedes bringing upgrades to one of the smoothest tracks on the calendar, some were tipping them as possible contenders for pole position and a win.

Instead, Ferrari and Red Bull once more led the pack in qualifying, Lewis Hamilton claiming P4 on the grid while his team-mate George Russell will start P6.

Hamilton ended Q3 nine tenths of a second off the pace of pole-sitter Charles Leclerc, a situation that left Wolff painting a bleak picture.

Mercedes had needed to switch to new soft tyres even to make Q3, Hamilton and Russell staring at Q2 elimination before their final attempts.

It's a second and third row start for Lewis and George in France, which is something to be satisfied about 👊

“I think we knew once we got the new tyres on and we are driving the car in anger a little bit, that we are going to be there as a third force like we’ve been all season,” Wolff told Sky Sports F1.

It was then put to Wolff that Mercedes’ race weekend has so far been “messy”, mentioned that they had tested different rear wings on the W13s during FP3.

Wolff responded by claiming Mercedes were in a way “freestyling” with their approach, since the race weekend was not living up to their expectations.

“You can see when you’re a little bit on the back foot, your expectations are on a certain level for the race weekend and it doesn’t come together, a kind of freestyling starts,” said Wolff.

“And with us it was mainly experimenting with rear wing levels and also tyre temperatures. But at the end, the overall package is just not quick enough and can see that.”

Wolff nonetheless agreed with the suggestion Hamilton’s qualifying performance had been “immense”.

It was, though, pointed out by Wolff that Hamilton would have been P5 had it not been for Carlos Sainz’s grid penalty.

Having taken a new power unit, Sainz’s sole focus in Q3 was to provide a tow to Ferrari team-mate Leclerc, knowing he would drop to the back of the pack.

Nonetheless, Wolff felt Hamilton had very much outperformed the car to secure that grid position.

“If we have Sainz there it is P5, but still a great, great job. He probably has extracted more than the car has at the moment.”