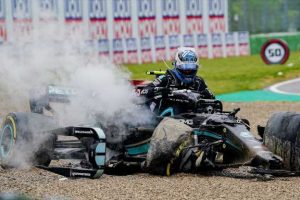 But while the Mercedes motorsport boss isn’t pointing the finger at Bottas for the contact, his driver shouldn’t have been in that position to start with.

While Lewis Hamilton chased Max Verstappen for the victory at Imola on Sunday, Bottas was scrapping for points.

Such was his pace, or lack thereof, that he was open to an attack from Russell with the Williams driver wanting to take P9 off the Finn.

Russell’s attack did not go to plan, the two making contact and going off at high speed. Both drivers were out of the race.

Wolff, Bottas’ current team boss and potentially Russell’s 2022 boss, was not at all impressed that the two crashed.

Perhaps more tellingly, he wasn’t happy that Bottas had put himself in that position.

“I’m not sure who’s to blame for the incident,” he told Sky Italia. “But the race did not go well for him, he’s making steps backwards.”

Wolff said Imola was a “really delicate” moment for Bottas, adding that he was “not fast today in this moment, and George as well was a bit too aggressive on a wet track.”

Russell, though, didn’t escape the Austrian’s ire especially after he confronted Bottas in the immediate aftermath of the crash.

Whatever Russell said to Bottas the response from the Finn was a middle finger with Russell then slapping at him.

“For me it’s a racing incident because if you look at their points of view, they’re both wrong. I don’t know what to say.”

The race stewards agreed that it was a racing incident, neither driver penalised for the crash.

But while Wolff wasn’t happy with Bottas, the Finn didn’t seem to get the full message, telling the media that his team boss had exonerated him.

“The overall feeling is that I’m not one to blame for that crash, for sure,” Bottas said.

“I don’t want to speak anything about our private discussions with Toto. But the feeling is I’m definitely not one to blame on that.”