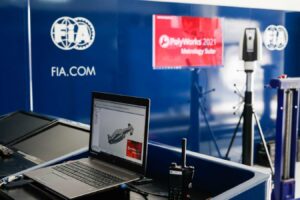 Ronnie Søgård Andersen has become the winner of the 2022 Charlie Whiting Award, given by the FIA in honour of the long-time former Formula 1 race director.

The 34-year-old Dane is an aspiring race director himself, and the award is won based on the results of a “comprehensive test” conducted by FIA officials, as well as “knowledge and competency demonstrated at national and international level”.

As part of his prize, Andersen will undertake a year-long mentorship programme that will see him head to FIA events around the world to learn from and shadow the FIA’s more experienced race directors – having already had the “out-of-body experience” of shadowing joint Formula 1 race director Eduardo Freitas at the recent 6 Hours of Spa in the World Endurance Championship.

Robert Reid, FIA deputy president for sport, gave Andersen the award via a video conference call with more than 200 FIA officials from across their global competitions on the virtual Race Director Seminar.

“The Charlie Whiting Award recognises and nurtures emerging talent such as Ronnie in their career progression as part of the Race Control management team. On behalf of the FIA, I would like to congratulate Ronnie on receiving the award for 2022,” said Reid.

“The judging panel deemed that Ronnie was the outstanding choice for his commitment, professionalism and appreciation of the role of Race Director.

“Ronnie will now enter into our 12-month mentorship programme as the next important step in his career path and we wish him well.”

Søgård Andersen said when accepting the award: “I am grateful to even be considered for this award. It’s an honour and a privilege.

“There are a lot of talented people out there in this field and receiving this award makes me feel very humble.

“To follow in the footsteps of someone as highly respected and approachable as Charlie is a huge honour.

“The award brings a tremendous opportunity to follow some of the brightest minds within the FIA Race Control structure.

“Trying to observe and take in all of that knowledge over the next 12 months is going to be a huge task which I am looking forward to.”

The Dane’s next stop on his mentorship schedule will be at the Berlin ePrix in Formula E, shadowing Scot Elkins to learn how the all-electric series runs over the course of a weekend.

In Formula 1, Freitas is set to make his race directorship debut at the Spanish Grand Prix, taking over from Niels Wittich for the weekend, as part of the pair holding the role jointly this season.