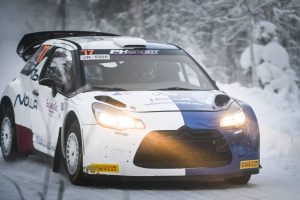 Valtteri Bottas was on course to improve upon last year’s result after day one of the Arctic Lapland Rally, sitting eighth in the overall standings.

The Mercedes F1 driver is understandably a big rallying fan, being from Finland, and this is the third consecutive year in which he has taken part in this event which is inside the Arctic Circle.

Bottas finished fifth in 2019, when he recorded a stage win, and ninth last year. He had four more stages to tackle to try and work his way up the order.

Bottas tweeted: “Fun as expected and challenging as expected! We are now eighth overall and trying to improve step by step. Already looking forward to the four beautiful and fast stages tomorrow.”

Fun as expected and challenging as expected! We are now 8th overall and trying to improve step by step. Already looking forward to the 4 beautiful and fast stages tomorrow ?❄️#VB77 #Rally @RautiainenTimo @PH__Sport @NollaOy @pirellisport

In an interview with Pirelli, who are supplying Bottas’ tyres for the rally, he described what makes him want to take on the challenge while most of his F1 rivals are relaxing ahead of the new season that begins in March.

“I always knew if I didn’t have any other commitments, it’s something I wanted to do again,” said Bottas. “I’ve done it twice before and for me it’s such a great challenge and so much fun.

“The roads are really beautiful and it’s just a nice, relaxed event. I really enjoyed driving on ice and snow and being out on the winter roads.”

With other F1 drivers in Kimi Raikkonen and Robert Kubica also having been fans of getting behind the wheel of a rally car, Bottas was asked whether it was a good training ground during the winter break.

“I always feel when I go rallying, it kind of backs up something else in terms of your driving skills,” he said. “I think it’s important to keep your car control skills in good shape during the winter break, so for me it’s certainly a benefit.

“I think it appeals because it’s so different, another challenge. For F1 drivers, rallying is also a bit more relaxed. There are fewer people around and it’s fun rather than being too serious for us.

“I know many other F1 drivers who would like to go rallying but obviously some are not allowed.”