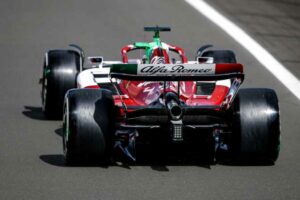 Alfa Romeo’s Valtteri Bottas will serve a grid penalty at this weekend’s Austrian Grand Prix, as the Finn requires a new power unit.

Bottas will be starting Sunday’s Austrian Grand Prix at the Red Bull Ring from the back of the grid as Alfa Romeo have been forced to fit his C42 with a brand new Ferrari power unit and ancillaries.

The Finn is moving onto his fourth ICE (Internal Combustion Engine), fourth TC (turbocharger), fourth MGU-H, and fourth MGU-K of the season – all of which have a permitted allocation of three for the season.

Bottas is also getting his third CE (Control Electronics) of the season, with teams only permitted two for the entire season.

On track for FP1 – the only session before qualifying today!#AustrianGP pic.twitter.com/8JLsWu10GH

It’s the latest Ferrari-related engine problem, following the recent high-profile problems encountered by Ferrari’s Charles Leclerc, while Haas’ Mick Schumacher and Kevin Magnussen have both retired from recent races due to engine-related problems.

The grid penalty will come as a blow for Bottas, as it essentially negates anything he achieves on track during the Sprint Qualifying session on Saturday.

The Finn finished the first practice session in 14th, 1.2 seconds away from the front-running pace set by Red Bull’s Max Verstappen.

Here’s the full report from the first practice session at the Austrian Grand Prix.