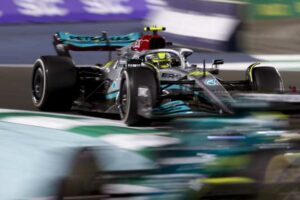 Mercedes are in a new position this season, and not a welcome one, with Jacques Villeneuve saying they can no longer hide bad weekends with a “strong engine”.

After eight years at the sharp end of the grid, Lewis Hamilton wasn’t able to make it out of Q1 at the Jeddah Corniche Circuit on Saturday night, the Briton eliminated from qualifying on pure pace, or lack thereof.

His team-mate George Russell did make it through, qualifying P6, with both Mercedes drivers in the points on Sunday night.

However, it was by no means what Mercedes are used to, Russell fifth and Hamilton scrapping through for a single point for tenth place.

“It is clear,” Villeneuve says in his latest Formule1.nl column, “Mercedes has fallen from its pedestal.

“For years they were superior, bad weekends could be camouflaged by their strong engine, but that is no longer the case.

“It will be interesting what the response will be in the team, because Toto Wolff and Lewis Hamilton are not used to this.”

According to reports in the German media, the Mercedes W13 is down by as much as half a second on the Ferrari and Red Bull cars with two-tenths of that said be because of the engine.

Villeneuve, F1’s 1997 World Champion, believes Mercedes’ fall from grace is harder on Hamilton than it is for Russell.

While the seven-time World Champion is used to winning, taking 82 race wins since joining Mercedes in 2013, Russell has spent his three years on the grid running at the very back of the field with Williams.

Villeneuve has all but ruled out Mercedes fighting for this year’s championship titles.

“We can say that competing for the prizes is no longer an option for Mercedes,” he continued.

“George Russell can still handle the car to some degree. Maybe that’s because of his years at Williams where he also had to drive a difficult car. But Lewis Hamilton is not coping at all.

“He’s always had a perfect car, he never had to push because they were so much faster.

“In the race he did alright, but on Saturday he was nowhere to be seen. The car does not seem to suit his driving style at the moment.

“You can make an engine stronger, but you can’t get extra horsepower that easily, and if the chassis won’t cooperate you have a problem.”

He added: “The championship is a long way off for them. By the time they are competitive again, Leclerc and Verstappen will be much too far away.”