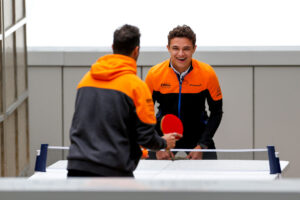 McLaren drivers Daniel Ricciardo and Lando Norris took time out to get to know each other better in a video on Formula 1’s website.

The light-hearted conversation saw the two team-mates discuss everything from the season so far, to Norris almost feeling like he needed to be sick after drinking a ‘shoey’ on the podium in Monza,

There was also the suggestion of asking George Russell for tips on posing for social media photos and plenty more besides.

McLaren’s success this year also pops up in conversation, as well as an exchange between the two about the Australian’s early struggles in the car.

There’s a surprise appearance from a World Championship challenger while the pair recorded their friendly chat, while Ricciardo takes aim at Norris for his supposed change in demeanour while on camera, as well as the Australian attempting to impersonate an English national treasure – which did not go particularly well.

The two drivers spoke in the paddock at Sochi after Ricciardo’s victory at Monza, before Norris would go on to be extremely close to taking his first victory in Formula 1.

Click here to watch the full interview between the two McLaren drivers.