Home » Racing » What is next for Sebastian Vettel after he announced he was leaving Formula 1?

What is next for Sebastian Vettel after he announced he was leaving Formula 1? 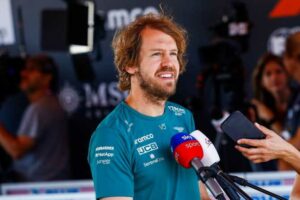 Sebastian Vettel has been laying out what may come next for him after he announced he would be leaving Formula 1.

The German made the shock announcement on Thursday and said one of the main reasons behind the decision was a desire to spend more time with his wife and their three children.

As one of the most active drivers when it comes to supporting causes he believes, there is no end to what may come next for Vettel but he himself has no clear idea as of yet.

The four-time World Champion said that he has interests he wants to pursuit both within racing and away from it.

“Lots of things, lots of ideas,” he told Sky Sports F1 before the Hungarian Grand Prix weekend. “I’ve lots of interests that some are very close to racing and maybe they will take more room in the future, and some have nothing to do with racing.

“I think it’s one thing is what we do and the other thing is probably who we really are and as much as people know me and we know each other, there’s elements that you don’t know about me.

“So the answer probably is it’s a little bit unknown. Because even though you have these plans, and so on, there’s no guarantee that they will all work and make make me happy.”

Vettel said he was also aware that by stepping away from the F1 grid, he would be losing out on the “big adrenaline rush” but did say he was open to exploring other forms of racing in the hopes that might provide something similar.

“I’m also aware of the fact that it’s a big adrenaline rush, standing on the grid, the lights go off, I won’t have that anymore. So I’ll see how that feels.

“For sure, there’s, you know, maybe the possibility to race other things in this world. But yeah, I’m not stepping out of this car and thinking of stepping into another straightaway. That’s not the decision I took and not the way I feel. I want to take that decision. Let’s see, but I’m excited and we will see how it goes.”

As one of the most universally loved drivers on the grid, the tributes to Vettel from both his current colleagues as well as those he has raced against in the past have been pouring in.