If, make that when, Valtteri Bottas loses his Formula 1 ride at Mercedes at season’s end and wonders why, he’ll need to look no further than the Emilia Romagna Grand Prix at Imola, Italy.

Bottas’ race at Imola ended on Lap 32 of the 63-lap race when he made contact with Williams’ George Russell. The massive crash, while the drivers were unhurt, resulted in a little finger-pointing and took both drivers out of the race. It pushed Bottas back to fifth place in the standings and one step closer to losing his ride at Mercedes. 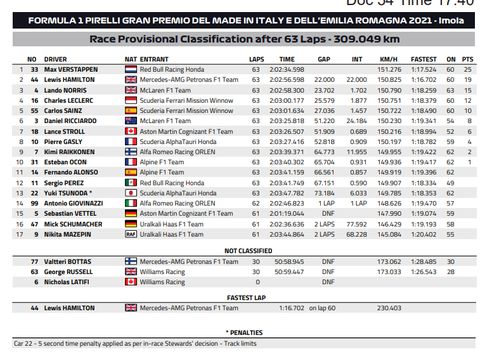 And, in a made-for-Hollywood twist, Bottas got knocked out of the race at Imola by the driver who will probably replace him at Mercedes next year.

“I’m OK physically,” Bottas said. “It was a half-decent shunt but obviously could have been a lot worse at that speed. George got close and decided to go for a move. Obviously the track is quite narrow, there is only one dry line and he went for the outside, there was space all the time for two cars but he obviously lost the car and hit me.”

Russell got out of his car after the crash, walked over to Bottas’ Mercedes and said a few things to Bottas before Bottas was even able to squeeze out of his damaged car. Bottas gave the discussion a single-finger salute.

“I haven’t spoken to him so far,” Bottas said. “I couldn’t hear a thing what he was on about and obviously we will have a different perspective on it. It was a tough race until then, from where I started it wasn’t easy to make ground. But I need to take whatever positives I can from this weekend and move on.”

Bottas has been at Mercedes as a perfect No. 2 to seven-time champion Lewis Hamilton since 2017. During that time, Bottas has won nine races and tuned in season F1 Drivers’ Championship finishes of third, fifth second and second. The runner-up finishes were deemed good enough for Bottas, 31, to keep his seat each of the last two seasons, despite late-season pressure that the team faced this past offseason to speed up the the timetable and bring in the team’s future No. 1 driver in Russell.

Russell, 23, proved to many last season that he’s ready for the promotion to Mercedes when he starred in a late-season race at Bahrain. There, he led 59 of 87 laps in a substitute role for Hamilton, who missed the race due to COVID-19 protocols. Only a botched tire change kept Russell from racing for the win.

Now, four months and just three F1 races later, it was Russell knocking Bottas out of the race and possibly out of his plush, though admittedly tight, racing seat at Mercedes.

“I think it was a very unfortunate incident and one that could have been avoided,” Russell said. “Valtteri was defending hard, and he is in his right to do so. The track was going left, and he was going straight. In these conditions with one dry line, it only had one outcome. It is frustrating but that is Formula 1.”

Sure, it was just one race early in a long season, but it was huge for Bottas. Should Bottas fail to finish first or second in the standings in 2021, that would make it much easier for Mercedes to make the switch for 2022. Third place won’t be good enough, and with Hamilton and Verstappen threatening to run away from the field, second place already looks to be unreachable.

After all, it’s a lot easier to justify removing Bottas to the Mercedes faithful if Bottas falls in the standings. Meanwhile, Russell’s stock rises every time he finds himself racing alongside Bottas.

Bottas left Imola fifth in the drivers standings with just 16 points. He trails not only Hamilton (44 points) and Verstappen (43 points), but also McLaren’s Lando Norris (27) and Ferrari’s Charles Leclerc (20). That’s not very Mercedes-like.

“Unfortunately, the crash between George and Valtteri was unnecessary,” Mercedes team principal Toto Wolff said. “Valtteri had a difficult first 30 laps and shouldn’t have been there, but George should have never launched into this maneuver. considering that the track was drying up. It meant taking risks and the other car is a Mercedes in front of him and in any drivers’ development as a young driver you must never lose this global perspective. Lots to learn for him I guess.”

And don’t be surprised if Russell is learning next year at Mercedes.