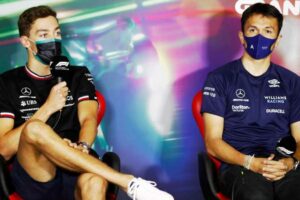 Williams’ Dave Robson says the results being achieved by Alex Albon are “at least as good” as George Russell was capable of.

Williams are not feeling the loss of Russell to Mercedes as hard as they could have according to Robson, the team’s head of vehicle performance.

That is due to the arrival of Albon, with the British-Thai racer returning from a year on the sidelines as Red Bull’s reserve and development driver. Albon was demoted from his Red Bull race seat at the end of the 2020 season but appears to have recovered confidence during his year working with the team behind the scenes.

Williams currently lie at the bottom of the Constructors’ Championship, with Albon scoring all three of their points after two top-10 finishes in Australia and Miami.

Having lost Russell after three years due to his call-up to the Mercedes team, Robson said the arrival of Albon has been a ‘like for like’ trade.

“I’m not sure it’s necessarily fair or helpful to make comparisons,” Robson told media in Monaco, quoted by GPFans.

“They are different but the results at the moment are probably just as good, or at least as good, with Alex. He’s got a huge amount of talent. Not just to drive the car, but I say to bring the whole team together and make sure we get the most out of everything every Sunday.

“So he’s got a very bright future, I think.”

Albon’s enthusiasm for racing has also seen the Williams team embrace some of his ‘joie de vivre’ as the team set up a hair-dye station in the Barcelona paddock after Albon had arrived with dyed red hair for Miami.

The fresh approach he is taking has rubbed off on the team, with Robson revealing how impressed Williams have been by his attitude.

“He’s happy just to jump in the car and make the most of what he’s got,” he said.

“Probably best of all, his whole attitude to the races has been outstanding. We’ve not had brilliant qualifying sessions recently but on Sundays, he just strikes that balance between being aggressive in attack and defence.

“He just gets on with it, knows how to manage the tyres and puts together a really good race, which allows us a bit of flexibility on the strategy.

“We know he will respond to it, deal with it and get the best out of the car. So probably that’s the thing that’s impressed me most – this whole approach to Sunday.”

Albon’s new team-mate, Nicholas Latifi, raced alongside Russell in 2020 and 2021, and said he knew he was in for a stern challenge being matched up with the returning Albon.

“Similarities? I mean, it goes without saying they are both extremely quick drivers,” Latifi told the official Williams website.

“Especially when Alex was announced as the race driver who was to be my team-mate, I had no illusions he wouldn’t be on the pace straight away, despite him missing out a year.

“I obviously raced against him in 2018 as his team-mate [in Formula 2] and I know just how quick he was. There are obviously some little different driving styles here and there, which I kind of knew going into the season as well, just from again having been team-mates with Alex before.

“I won’t share the driving style secrets because maybe they don’t want to disclose that! But no, it’s been great having them both as team-mates.”