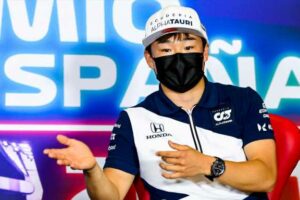 AlphaTauri’s Yuki Tsunoda, has said he is getting “more familiar” with all of the demands that come with being a Formula 1 driver.

The Tsunoda bandwagon has been hitting a few potholes since making a very good first impression during the pre-season testing period in Bahrain, which was followed up with a small handful of points on his debut race weekend.

But, since then, Tsunoda has not been able to capitalise on that performance and his ‘rookie’ tag has been on full display with mistakes and somewhat immature outbursts on team radio.

Yet it can be easy to forget that Tsunoda is still just five races into his Formula 1 career and so he is still very much getting a feel of what a race week at the highest level actually means.

One of the biggest surprises Tsunoda has experienced is the amount of media work which is required, especially on Thursday, and that has left him lacking energy in the race weekends that have passed so far.

“In general, after five races now, I am feeling more familiar with the race weekend,” Tsunoda said in AlphaTauri’s team preview.

“There are less surprises and I feel more in control and I’ve got used to some of the things that surprised me earlier in the year like all the media work at races on a Thursday.

“It was using up a lot of my energy but now I am more comfortable with everything which is a positive thing.

“The technical aspect is still quite challenging, especially as in the current situation I have been struggling a bit with the car set-up.

“I believe that is normal as I have only done five races, but the important thing is that I am learning a lot about the car.

“My mindset is fine, I’m in good shape and things are going in the right direction. There is still some pressure, but I am enjoying every minute of being a Formula 1 driver and there is always something new to deal with at every new track.”

Baku will be yet another track which Tsunoda has no experience of racing at but, having done plenty of laps in the simulator, he is hopeful that he will be able to adapt to this particular street circuit better compared to the very daunting challenge that was Monaco.

“I have never raced there before [in Baku] but I have driven it on the simulator of course,” Tsunoda continued.

“Most of the corners seem to be 90 degree turns and almost all the corners are taken in similar speed range so it will be interesting.

“It’s another street circuit, but it looks as though it might be a little bit easier to adapt to than Monaco.

“Hopefully I will be in a better situation there. Again, I will try and do as many laps as possible and my main aim will be to make sure I don’t get too close to the walls in practice and qualifying.

“I will take the Monaco experience and everything I learned there and apply it in Azerbaijan.

“I am pleased with the definite progress made by the team with the car since the beginning of the season.

“It’s true the results have not come together yet and I am on a steep learning curve.

“I spend as much time as possible talking with my engineers to learn more and I hope that will help me continue to make progress through the season.”