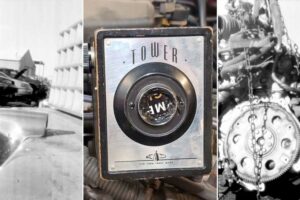 Since the swift completion of my appointed junkyard rounds take place so regularly, it makes sense for me to document car graveyards with film cameras of vintages ranging from ancient to just-barely-last-century. I picked up a 1948-ish Sears Tower 43 box camera for cheap a while back, only to learn that the lens was bad and the shutter assembly rusted solid. What to do?

What I do in this situation is disassemble the camera, remove the offending components, and replace them with a homemade pinhole lens. I had excellent results with a pinhole-ized 1910 Kodak No. 2A Folding Pocket Brownie and a pinhole camera made from a 2002 Toyota Camry side mirror, so I felt optimistic about this project. I opened up the Sears Tower 43 and glued in a piece of aluminum extracted from a can of Duvel Single Fermented where the lens/shutter once lived, then used a very thin sewing needle to poke a hole to create the infinite-depth-of-field “lens” that pinhole photography is all about.

These photos were shot on Lomography Earl Gray 120 film, with most exposures at between one and five minutes.

Since objects a quarter-inch from the pinhole focus just as well as ones a light-year away, you can get some good junkyard shots with a rig like this.

Here’s the 1984 Mercury Cougar Car Clock of the Week that we saw a few months back.