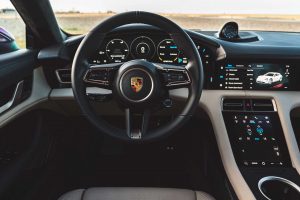 There won’t be as many OTA updates as you get on a smartphone.

The fact cars have become rolling computers is yesterday’s news and automakers are far from being done implementing sophisticated software into their vehicles. It’s even happening post-purchase as more and more companies are announcing support for over-the-air updates. Excluding Tesla, Porsche is among the first to plan OTA revisions for its cars, kicking off with the Taycan.

The early electric sedans built during the 2020 model year with the updated software applied have quicker acceleration for the Turbo S, improved charging functionality, and the Smartlift function for the models fitted with air suspension. While more future OTA updates are on the agenda, Taycan director Robert Meier says Porsches won’t follow the strategy used by smartphone makers that frequently push out new software to their devices.

The traditional formula of launching a next-generation car then giving it a mid-cycle facelift approximately four years later will remain in place. By embedding support for OTA updates, Porsche will be able to bundle more equipment into its cars from the get-go and put it behind a paywall. Functions on Demand is what it’s called, allowing Taycan owners to get over-the-air updates to unlock features like Active Lane Keep Assist by getting a monthly subscription.

Robert Meier told Autocar the Taycan and future models supporting OTA updates will remain first and foremost cars rather than turning into smartphone-like devices: “We don’t plan to really go with many, many updates like on a smartphone. It’s not a smartphone: it’s a car that you have to drive safely. In my eyes, we won’t see these [updates] as frequently as you have it on a phone.”

Following the Taycan / Taycan Cross Turismo, the next Porsche model to support OTA updates will likely be the all-new Macan. It’s being developed exclusively as an EV and will be the first model from the VW Group to ride on the PPE platform the Zuffenhausen brand is developing with Audi. The Four Rings are coming out with an equivalent Q6 E-Tron, with both planned for a 2022 release.

Porsche and Tesla are not the only automakers to work on over-the-air updates as Ford is doing the same for the Mustang Mach-E and F-150. In addition, VW will update the ID.3 and ID.4 sooner rather than later, while Mercedes has actually been rolling out OTA updates in the United States since 2013. The Jaguar I-Pace got 12 miles of extra range at the end of 2019 through a software revision, and Volvo is also improving its cars on the fly.